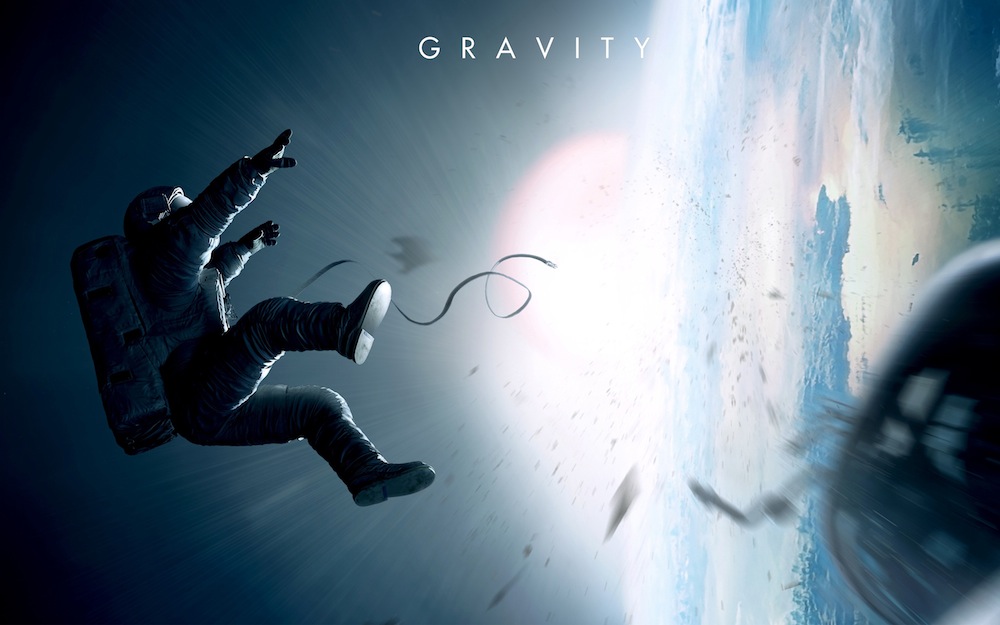 There’s some innate genius about the way director Alfonso Cuaron (Children of Men, Harry Potter and the Prisoner of Azkaban) can juxtapose beauty with death and darkness. Gravity, a passion project over four years in the making, is yet another example of this skillful blend. It opens with text explaining, “Life in space is impossible.” This is followed by an extended sequence of beautiful shots of Earth from outer space and a group of astronauts, including Dr. Ryan Stone (Sandra Bullock) and Matt Kowalski (George Clooney) working on a shuttle.

Hell breaks loose almost immediately after, as debris from a destroyed Russian satellite drifts into the orbit trajectory of the mission’s shuttle, and rips it apart in seconds. Stone finds herself stranded in space, drifting around and trying to get to the International Space Station to take an escape pod home. Dialogue is kept to a premium in the no-frills script, while the movie focuses instead on a fusion of art-house filmmaking and Hollywood-style action and destruction.

Gravity represents one of the most stunning technical achievements in cinema. From the breathtaking shots of Earth to the impressive marriage of human faces to a mostly-digital environment, it’s nearly impossible not to be immersed in the beautiful cinematography. Cuaron is well known for his long takes—shots that last a great deal longer than the normal couple of seconds—and he brings that trademark into this film with a greater skill than ever before. The opening shot, twisting around a shuttle as the astronauts work and transitioning smoothly into disaster, lasts for almost ten minutes. Space aficionados will delight in the accurate lack of sound in space. The scenes of destruction and mayhem are almost completely silent, lending an additional eerie edge to the tension.

Steven Price truly nails the soundtrack, as well. The majority of the film’s music serves as a tense undercurrent to the action, with pulsing bass and rising strings driving the disaster sequences, but Price mixes it up with more sweeping, ethereal tracks for the calmer scenes and a downright epic piece for the climax. It does just what a soundtrack should do, and perfectly supplements the rising tension of the film and ends with the powerful emotional release at the conclusion.

It would have all been smoke and mirrors, however, were it not for Bullock’s performance. Bullock and Cuaron refined Bullock’s character right down to the way she would breathe during certain scenes, creating a deeply emotional character that gives a beating heart to a film that could have just been a rote action flick. A good deal of the tension is watching the physical and psychological tolls Stone endures over the course of the film.

Gravity is the film to beat this year. It has the nonstop action and tension of thrill rides such as Speed or Unstoppable, but also features a powerfully emotional performance from Sandra Bullock and just a sprinkle of spirituality. Such high quality across all aspects of a film is exceedingly rare, and Gravity is a stunning . Prepare to hold your breath for 90 minutes.