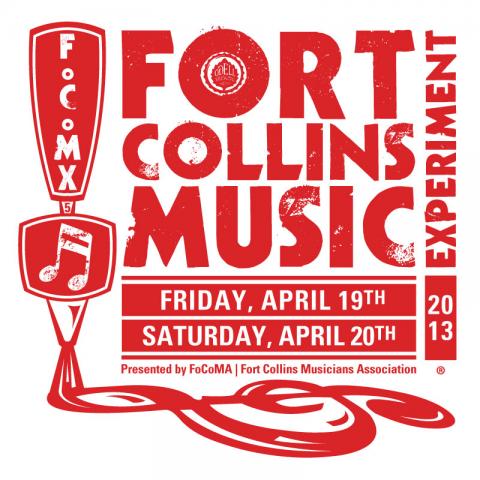 Dubbed the “Biggest Little Festival in America,” Fort Collins Music eXperiment will continue the tradition of bringing local music and fans together for the fifth year in a row on April 19th and 20th.

FoCoMX was co-founded by Greta Cornett and is put on by the Fort Collins Music Association. Downtown Fort Collins plays host to 240 bands at 24 venues for a weekend of live performances from the best bands of Colorado.

The eXperiment was started by Cornett in order to get some recognition for the Fort Collins music scene and celebrate all the bands that grow out of the city. The event has all genres of music, so there’s something for everyone to enjoy.

FoCoMX has doubled in size each year, with 320 bands playing in the 2012 festival. This year, FoCoMA took advice from participants and decided to make the 2013 festival a little smaller in order to ensure the event is managed well.

“This year we’re hoping that the quality will be a lot better for everyone,” Cornett said. “We want to make sure if we are putting something out there that it is the best on all levels.”

“Come with a really open mind that you might find a new favorite band,” she added. “In the music scene in general there are a lot of bands that will break up, but just as fast as some bands break up, there are new bands forming. Being able to give them a platform to go out and support their talent is really cool.”

While 240 bands and 24 venues is still a large festival, tickets will be limited compared to last year, so get yours soon.

How to Get Tickets

Tickets cost $20 on pre-sale and $30 after April 7th. They can be bought online at FoCoMX.FoCoMA.org/Tickets. Tickets can be picked-up starting at noon on April 19th in front of the Art Lab on Linden St. in Fort Collins. Make sure to pick them up before entering your first venue at FoCoMX.

Attendees receive a comfortable cloth wristband that is good for the two-day festival. This wristband gets you into all the venues (some are 21+) without extra charge. Many of the venues serve food and drink, which cost extra.

Free tickets are available to those who volunteer for four or more hours at FoCoMX. To sign up, go to FoCoMX.FoCoMA.org/Volunteer.

A Boy and His Kite (Indie/Alternative)
Friday 8:30pm-9:15pm at Cranknstein

A Mouthful of Thunder (Indie/Alternative)
Friday 10pm-10:45pm at Aggie Theatre

Rachel and the Kings (Rock/Pop)
Saturday 9pm-9:45pm at Aggie Theatre