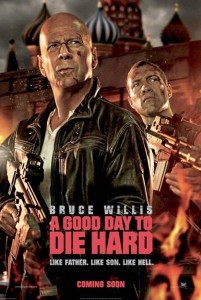 When Die Hard came out in 1988 it immediately made its mark on the stagnant ‘80s action genre. The film introduced audiences to John McClane, played by then newcomer Bruce Willis. Die Hard turned the genre on its head by featuring a hero with whom audiences could relate. McClane was just a New York City cop who always happened to be in the wrong place at the wrong time, but still managed to save the day. Fast forward to present day, and 4 movies later, the John McClane who previously brought audiences to the theaters is no more. In A Good Day to Die Hard (or Die Hard 5) young director John Moore tries his hand at the franchise, and comes up short in just about every way imaginable.

Die Hard 5 takes the McClane family to Moscow, Russia for some father-son bonding time. The only problem? John McClane hasn’t spoken to his son in years, and has finally tracked down his location. After a quick flight and some sight-seeing John McClane bumps into his son Jack (Jai Courtney) after a series of impossible coincidences. It’s revealed that Jack is a CIA operative carrying out a mission to prevent a nuclear-weapons heist. Unlike early Die Hard films, Die Hard 5 focuses less on the tension of an action scene, and more on cheap thrills.

The first big action piece of the film follows John, Jack, and a group of unknown terrorists as they drive through the streets of Moscow. The sequence is nearly incoherent, as it relies heavily on quick cuts away from the action and feels out of place on a narrative level. The strained relationship between John and Jack is never fully explained outside of clichés and it becomes apparent over the course of the movie that the audience shouldn’t expect much in the way of character development. In fact, it feels like the John McClane of old is completely absent from the film.

Bruce Willis has made a massively successful career for himself since the first Die Hard released. Still loyal to his fans after all these years, Willis has returned to the franchise for each film. Sadly, Willis’ last two outings as McClane have all but erased the smart-assed everyman action hero we’ve come to love. Die Hard 5 sees McClane jump out of buildings, take bullets, and drive a car out of a helicopter. But, the most egregious betrayal of the character comes in the third act when John McClane and Jack walk into Chernobyl and go for a swim. Willis’ portrayal of John McClane in Die Hard 5 makes the character seem like he belongs in the films the franchise tried to distinguish itself from 25 years ago. Jai Courtney tries his best to give Jack McClane life but it ultimately comes across as a poor Bruce Willis impression.

Director John Moore may go down as the guy who killed Die Hard, but there are a lot of fingers to point. The script is weak and feels like it was edited to bits during production. Bruce Willis gives one of his laziest performances to date and effectively ignores what actually playing John McClane means. A Good Day to Die Hard might as well wipe off the “Die Hard” title from its name and pretend to be a different movie. Though, it still wouldn’t be any “good.” 1/10