Some may be familiar with the old version of Anchorage, the hardcore/metal outfit that has graced Greeley and all of northern Colorado with their sounds for over four years. They’ve come a long way since their first release, I Have Seen Further, an album that had a chaotic and almost alternative metal sound behind it’s eerie synthesized interludes. The band also released an EP with a similar sound that was featured in the BandWagon last year. Although those two albums and the multitude of shows the band has played have built a solid Colorado fan base in the metal and hardcore music scene. They’ve taken a big step in a new direction with the late January ten-song release, Patience.

Even on the first track alone, a frequent listener of Anchorage wouldn’t be able to tell that it’s the same band. Where there were once the firing harsh vocals of frontman Kevin Gentry, there are now soft vocal melodies and clean twangy guitars that shred even without distortion. The two guitars sing beautifully to each other in the hands of guitarists Roy Catlin and Scott Kelly as the sound turns itself into a space age and indie rock collaboration. But just when the listener may question if Anchorage has the same edge that they did before, the fast paced beginning of the second track “Time Machine” will grab anyone’s attention. For a song that the band says was last recorded for the album, it is placed perfectly in the chemical combination of songs on “Patience.” 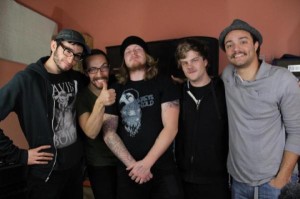 The fourth song on the album “The Fog,” features drummer Joe Hittle and bassist Derek Arrieta, the newcomers of the band, blending the heavier styles with their new rock downbeats and well-timed synchronizations. The new style of Anchorage is almost reminiscent of an early Circa Survive, where the haunting vocals compliment the distant feeling that the droning guitars give in the background.
Another impressive song on the album is the title track, a slow but groovy jam that the band says is about “what life would be like to be without the one you love.” The choruses on this disc are catchier and more memorable, the vocals are more dynamic, and the arrangement is nearly perfect. If this new full-length disc catches the same amount of attention that they were getting with their others, they’ll be en route to the top of indie and metal fans’ to-see lists for 2013.