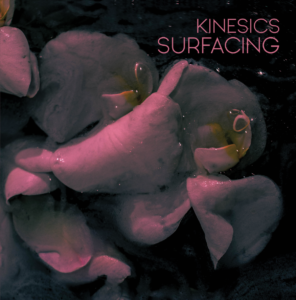 The release of Kinesics’ full-length album Surfacing will be its third attempt at seeing the light of day. Self-proclaimed “sad rock songs” sung mournfully and deep, this is the full and final realization of music which began its journey back in 2015.

There’s a beauty in the unexpected here, most notably the fact that the somber, low voice of Kinesics’ songwriter belongs to the diminutive, dare we say cute, alto – Kenzi Everitt. A solo project on her first two tries, there’s now a universality to the work. The androgyny in her liquid vocal delivery, fully-invested band arrangements, and the fact that her main collaborator (guitarist Jason Barteck) is also her fiancé reflect the band’s mantra of community, teamwork, and equality. Did I mention that the drummer and bassist are married to each other too? They are. It’s adorable.

“(Jason and I) played a duo set at Larimer Lounge to 7 people,” Everitt says. “4 of those 7 people came up to us after the set and said ‘we want to be your rhythm section’ we chose two of those 4,” she laughs: bassist Malena Roberts and husband Corban.

“The couples thing is funny to us,” Barteck says. “We’re not projecting our relationship into this music. Separately, we’ve had to work on our own relationships and develop communication skills; being on the same page as each other. So when it comes to rehearsing with the band, we’re pretty focused.”

Self-producing the record (with drummer Corban Roberts snagging the album’s mixing credit) the band invited their peers into the studio to vote on the album’s single, sequencing and even to name Kinesics’ genre, notably: Is This Prog?, Post-Post-Hardcore and Post-Party Rock. 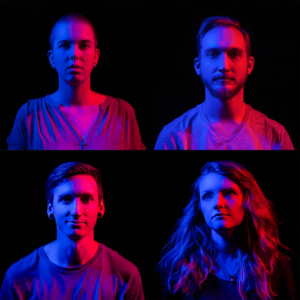 We hear Surfacing as a slick, female version of Pedro The Lion’s Achilles Heel with the instrumentalists’ identities shining brightly. “Back To You” is arguably the hookiest melancholy melody in this collection of totally hook-y melancholy melodies. (Check out the lyric video premiere June 4th on bandwagmag.com). Everitt’s frank pleas ground the band’s rhythmic ambition in an earthy, calm flow, turning our ear with each chilling lilt.

“In Between” and “Hold” feature excellent bass & drum interplay beneath dramatic vocals, while a badass sweep of electric guitar finishes off key track “Lions,” a tune in Everitt’s so-called open mic greatest hits. “All of my college friends would sing along with the chorus of that one. I played it at a friend’s house once where the power to the mics went out. Enough people knew the lyrics that it was fine – they yelled them out over the guitar amps in this shitty basement house show. It was perfect.”

The nimble clip of stick-click drumming highlights the galloping “We’re All Gonna Die,” an attempted relationship tune turned-zombie apocalypse song. Musically, it gives a glimpse into the transformation from Everitt’s solo folk into fully-fledged rock. “If you go, then I’m going too … no, I’m not letting go of you now,” she sings. Already, Kinesics have their hooks in us deep – we’ll happily take the plunge.

Kinesics celebrate the release of Surfacing on Friday, June 22nd in Denver at Barfly: a free, all-ages, wheelchair accessible venue.