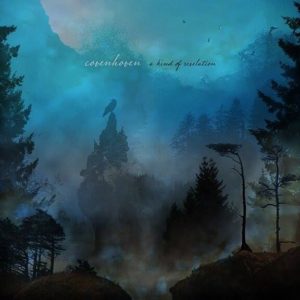 “Where To Begin” – a simple question revealing that there’s much to tell. So is Covenhoven mastermind Joel Van Horne’s gift: the ability to fill oceans of meaning through simple use of poetry, guitar and voice. This opening track and the entirety of A Kind Of Revelation weaves an arpeggiated spell on us with its haunting mix of plucked strings, synth beds and cavernous vocal reverberations.

Inspired by time on the west coast, Van Horne calls A Kind Of Revelation his “ocean record.”  Impressively self-produced, his only additionally credited recording engineer is his late brother Ben.

“I lost my little brother Ben a week after the album was completed,” Van Horne says. “He was taken from us way too soon. We did several recording sessions together at Mighty Fine (Greeley native Colin Bricker’s recording studio), and he was instrumental in mixing the record. I loved working with my brother. We’d often stop and relish in those moments, together in the studio doing what we love most. The record is forever dedicated to his memory.”

Dedicated indeed, the subtle and seamless production and songwriting on A Kind Of Revelation paint a picture worth a thousand listens.

“Sirens Of The Sea” begins with a gorgeous, echoing canyon-call. Later, Triplett banjo-plucks filter in effortlessly amongst the thick atmosphere.

The poetic “Giants” haunts, with “Clinging tightly to the guardrails, watching lovers take their leap – I know when to put my fists up and when to whisper please.” “Camino Real” slips the western skies of Ben Waligoske’s slide guitar into this ocean homage as a homeward hat-tip to Colorado.

The vocal on “Ghost Of Kerouac” is wise like driftwood gnarled from life experience: “Like the ocean that you’ve been staring at is just a photograph she gave you. The shores you swore you were standing on – were just a story that you’ve been telling wrong. And you’ve been dwelling on the last line – like it’s somehow gonna save you.”

A masterful third act in the Covenhoven album cycle, A Kind Of Revolution is, as its eponymous closer states, like “waking up from a dream that never happened.” Entrancing in its blurred accidentals, but crystal clear – preserved in the memory of “when a song was a kind of revelation, some sort of magic in the low light.”

Covenhoven celebrate the album’s release on June 12th at The Bluebird Theater with The Stilltide – special guests worth arriving early to see.