When Brent Cowles (pronounced like hot “coals” for all those about to butcher it) was bouncing around ideas for his new album, he stumbled upon a line he had written in a notebook. It was an empty page with only the words “How To Be Ok Alone” written at the top and a colon: the beginning of a list he was never meant to finish. Inspired by this attempt at a self help-like guide, he wrote the title track to his new album and hit the studio. 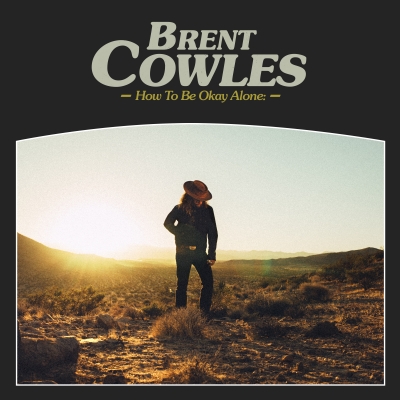 Cowles made a name for himself in the music community with his band You, Me, and Apollo. With YM&A, Cowles toured the country and learned the ins and out of the business. Eventually, the band called it quits leaving Cowles with the question of what to do next.

Then in 2017, he released the EP Cold Times under his own name and something clicked. The blues-rock roots of his sound spoke to Colorado audiences and it was quickly picked up by all the major local musical media outlets as well as a spot on the NPR Slingshot program.

The success of Cold Times set the bar high for his next album. To surpass it, Cowles enlisted the help of long-time friend and producer Joe Richmond (who was once on the cover of BandWagon with his former band Churchill). Together, they wanted to break up the recording process and try something different.

“This time we had the idea to go to the Joshua Tree area in California, rent an AirBnB and turn the Air BnB into a recording studio for about a week, and isolate ourselves there. We would wake up in the morning record some music, have lunch, then soak in the cowboy hot tub (video below) then record music into the night,” says Cowles.

For Cowles, he doesn’t quite feel the pressure of having to live up to any certain expectations set for him by his previous work. The making of the music comes naturally to him. “I think I get nervous after it’s done. Doing it is so much fun, there’s just so much passion there and everything is new, you’re excited about what’s happening and it feels like there is some magic there. Then when it’s done, it’s mastered and sent off to the label and there’s nothing you can do about it then. I think I’m nervous whenever I’m about to show it to the team and the people who I really want to be on board to make things happen with it,” says Cowles.

It’s a good time for Brent Cowles and his music. Recently signed to Dine Alone Records alongside industry giants like Dashboard Confessional and Jimmy Eats World, How To Be OK Alone is set to pop. “We were talking to a few different labels at the time. I guess there are a few super important things you want to consider. First off, does it seem like they care about your music? When you meet someone in person you can tell if they’re being genuine and real. When we met our label rep Jason it felt like the right decision.”

Everything is a part of the learning experience for Cowles. Recording How To Be OK Alone taught Cowles a few things about himself, or more importantly, how much he still has to learn. “I haven’t figured a damn thing out. All I know is in order to be OK I put a lot of value in the people around me like my friends and my family. You can’t put your happiness on anyone else, but you definitely can’t do this life thing alone.”

How To Be OK Alone is available everywhere June 15th – catch him live at May Play in Downtown Greeley on Friday, May 11th.