Trial & Error, the brand new EP from Longmont’s One Flew West, kicks off with a false claim: “I know no one’s listening, but I’ve gotta get a little something off my chest.” Tried and true emo-honesty comes off OFW’s chest in spades, but the truth is, more and more of Northern Colorado is all ears. Shout-y open-throated hooks throughout the EP evoke images from its release show last month at The Bluebird Theater, packed with hoodied disciples bopping and shouting along.

“One thing we tried really hard to convey on this EP was the energy of our music that we display at our live show” OFW says. “A big part of that was incorporating gang vocals into the recording. We always get the audience to sing along when we play live and we wanted to harness the energy that comes with that into a recorded song.” 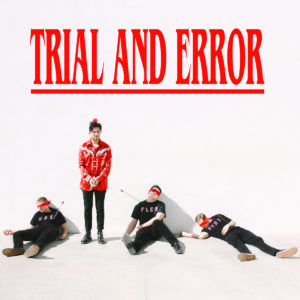 The title track and EP’s first single pulls out all the expected stops from a tune featured on a “Pop Punk’s Not Dead” Spotify playlist, having racked up 75,000 spins in two months. “I wanna say f*ck you in a million different ways” sung in Linden Jackson’s clean vocal above thundering tom-toms from drummer Jonah Bartels certainly gives fans of the band’s snide humor what they want.

Trial & Error provides more than the band’s signature juxtaposition of frank relationship woes with sweet, singable melodies, though. A frequent shift of sub-styles and the occasional not-so-pop chord structure keeps the record interesting enough to catch the ears of kids who didn’t grow up on Blink 182 & New Found Glory. Maybe the fact that Jackson has been “playing this game into my adult years” (“Best Worst Thing”) – or that his “friends are getting married – moving far away” has dictated the band’s songwriting approach as they strive to “do their own damn thing” as sung in “What Do I Know.”

“The feeling of watching everyone around you grow up while you still feel like a kid for pursuing music as a career was a major source of inspiration for this entire EP,” Jackson says. “Every member of the band has felt this way at some point, but this is our life. We can’t imagine not being a band, and not doing what we’ve always loved to do.”

Most stand-out in the do-your–own-damn-thing department is the choral chain-gang refrain and swampy lead guitar via David Di Salvo’s slide in “Staying In.” It’s the most genre-crossing effort on the EP, showing a lean into southern rock. “This is the first time that David has incorporated slide guitar into one of our recorded songs,” the guys say. “It displays another dimension of our musical style while still meshing well with the more fast-paced rock songs.”

“Out Of Time” finishes off the EP with more classic Pop Punk textures, complete with a reference to Twin Peaks and claims of running away together. Strident electric guitars and a soaring “pretending everything is fine – we are running out of time” round out this collection of songs for the band’s ever-growing fanbase.

All in all, Trial & Error does well to satisfy fans of the band’s heavier material but maintains an identity that can’t quite be pinned down. In their words, “it isn’t heavy in the sense that it would terrify your grandma – the band is still driven by an acoustic guitar just as it always has been, but we’ve cranked up the tempo and energy. We think we’ve finally found that sweet spot that balances light and heavy.”

With pure vocals and the aforementioned acoustic guitar on nearly every track, there’s still a sense of vulnerability and quirk among the crash cymbals, X-Files nods and whiskey bottles in One Flew West’s trials, errors and (in the case of this EP) their successes.

Catch One Flew West on February 7th at The Mesa Theater in Grand Junction, Colorado and nationwide throughout 2018.