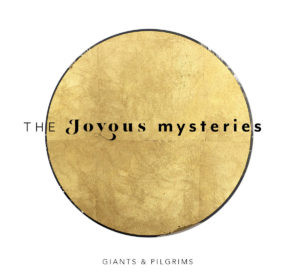 The best songs stand on their own. Shiny packaging can make for an attractive top 40 hit, holiday gift or Christmas cookie, but the ones that really resonate are the personal ones hand-made with love. Giants & Pilgrims’ The Joyous Mysteries sets out to give us such a gift, though not without some slick sonic tricks up its green sleeves.

”There is an approach to Christmas that is so saccharine and covered in lights and plastic wrap” Giants & Pilgrims singer-songwriter Tim Coons says. He calls this release, their sixth, an attempt to present “peace and beauty against the Christmas gloss.” Their niche of Iron & Wine-like folk with Christian undertones does so. Thoughtfully.

It’s the thought that counts, after all, and much has been put into The Joyous Mysteries. After visiting the Mother Cabrini Shrine in Golden, Colorado, Coons (a non-Catholic) was taken by the Catholic term “Mysteries” – which poetically names different series of events in Christ’s story. He recalled thinking “What a great thing for instrumental pieces.” Inspired, he composed and produced four tunes which could easily be nestled-all-snug between Bon Iver and Sigur Ros’ work.

The album weaves these originals between four interpretations of classic Christmas carols. The choice to combine the originals with the carols came surprisingly late. “The Annunciation,” “The Visitation,” “The Nativity,” and “The Presentation” were originally intended only as accompaniment for visual artist’s interpretations of said Mysteries. In a moment of revelation with his wife Betony (whose art process is soundtracked by “The Annunciation” on Imago Divina’s Youtube channel), Coons decided to pair the instrumentals with carols he and pianist/arranger Charla Bultman had been playing. After a confidence boost earned with a battle-of-the-bands win, voila! A hip Christmas record idea was born.

“The Annunciation,” the first of The Joyous Mysteries, entices the listener with delicate piano and lonesome whistle which swim into the glowing light of brass and church organ. Craig Basarich’s Baroque trumpet is the first indication we might be in Christmas town, but one reminiscent of Chip Davis’ acoustic, synth-less highlights, evoking far off wintery magic with syncopated handclaps fading into the distance.

“O Little Town Of Bethlehem” features a melancholic piano refrain furthering the illusion that we’re not being taken for a sleigh ride; rather a trip through lost cuts from Glen Hansard’s Once. Here and throughout the album, Coon’s coo-ing harmonies with Bultman (all recorded in single takes) float atop a lightly charging rhythm of mystery and urgency. You can almost see two weary travelers cresting a hill with the glow of Bethlehem’s light in the winter distance.

The stark minimalism of Bultman’s stately piano on “The Visitation” supports Coon’s signature vulnerable vibrato, pulling off quite a trick indeed: evoking something magic from our past with something completely new.

“The Presentation,” the album’s most impactful track, swells around the listener in a snowfall of kid pianos and ring-out percussion reminiscent of Björk’s “Aurora” with Tubular Bells-like synths. 1980’s sonics re-popularised by the likes of Stranger Things pulse to the album’s “wow” moment, presumably illustrating infant Christ first being seen as the Messiah. Like the best gifts, “The Presentation” brings out our emotions with a surprise: sudden bells and mellotron choir create golden beams of light above hard-panned stereo percussive claps, setting up The Joyous Mysteries’ denouement – a simple welcoming of the new year via an “Auld Lang Syne” duet.

With all the thought, sonic exploration and multi-disciplinary crossover, Giants & Pilgrims strong suit is still the simplest; a more ancient human practice than Christianity itself: male / female vocal harmonies. Combined with a fresh wonderland of Tony Garza’s well-produced instrumentals, we get the sense that these recordings have been made – by hand – with pure reverence and a childlike sense of wonder. For those seeking a modern, sincere take on Christmas music this year, The Joyous Mysteries is a true cup of audio kindness.