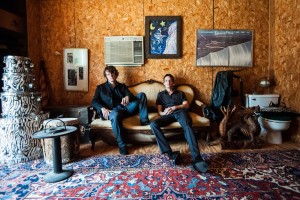 Bringing a little taste of Mississippi country blues to the Greeley Blues Jam, Luther and Cody Dickinson are the two brothers behind North Mississippi Allstars, celebrating its 20th Anniversary this year. Both are the sons of Memphis institution Jim Dickinson, who, along with fronting Mud Boy and the Neutrons, also worked along Aretha Franklin, Kris Kristofferson and Bob Dylan as a pianist and producer. So Cody and Luther have an enviable background. They describe their sound as “blues-infused rock and roll.”

The two brothers put out five albums from 2000 to 2008, and nabbed two Grammy nominations for “Best Contemporary Blues Album,” before they decided to work on their own projects. Cody worked on movie and television scores, such as Black Snake Moan, and produced Ian Siegal’s last two albums. Luther, in the meantime, formed two bands, The South Memphis String Band and The Wandering, and released a solo acoustic album that earned a nomination for “Best Folk Album” at the 2013 Grammys.

In 2010, Cody and Luther reunited, following their father’s passing, and recorded Keys to the Kingdom. Their most recent album, World Boogie Is Coming, was released in 2013. The North Mississippi Allstars will be playing on Saturday, June 11, at 9 p.m.