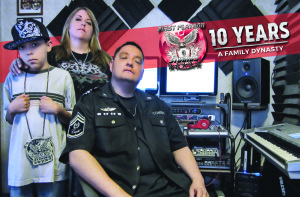 Skipdogg tha Souja is a man of the Greeley hip hop scene. Few people have dedicated themselves to the development of local talent like Skipdogg, and for the last 10 years Skipdogg built First Platoon Studios into the go-to place for local hip hop.

From his home studio where he lives with his wife, Lady Evo, and three kids, Skipdogg works to promote and develop the best and brightest in local talent. While he does have rates for anyone looking for studio time, if he sees potential in what you are doing and you have the drive Skipdogg will get you what you need to get started.

“These street guys don’t have to act stupid and sit here and think they have hits on a laptop and a mic. They can come to someone who knows what the hell they’re doing.”

First Platoon Studios is an all-in-one operation. They offer everything from the ground up. From beat making, production, vocal recording, graphic design, to printing of the CD, if Skipdogg believes you have what it takes, then he will help you make it happen.

“I’d rather be known very well locally and trusted locally. If a local artist needs something they can come to me. And we take care of them. We’re a family business, we don’t allow drugs or alcohol in the studio. They can have a beer or two if it’s a Friday night or something, but I have my son here learning. We’re drug free,” says Skipdogg.

Skipdogg prides himself on setting a good example for his son, Lil Janus who not only raps and makes beats himself, but is set to inherit the studio when Skipdogg is done. First Platoon Studios truly is a family enterprise as Skipdogg, his wife Lady Evo, and son Lil Janus all rap and produce with several family collaborations under their belt.

The family side of things is the bedrock of the operation. Skipdogg got involved with hip hop after his older brother was murdered. Before he passed away, he was an avid rapper who would record his own demos to tape, which Skipdogg still has today. Wanting to keep his brother’s spirit alive, he devoted his life to the craft. “When I moved from California to here, I built all this for him. He helped me build this. For any big decision musically I think, ‘what would my brother think about it?’”

Now that he has hit the 10 year mark, it is clear he thinking of the future. Both he and his wife are releasing one final solo album in 2016 called Juggernaut and Moonshinnin’ respectively.

“When I’m done I want to leave a mark on Greeley. They’ll say ‘you know what? There was one guy in Greeley who put his heart and soul into all of it and put out some of the best local talent as far as hip hop goes.”