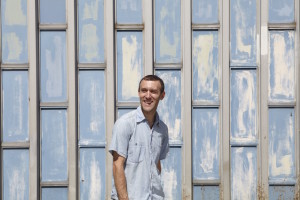 Ramble Jon Krohn, better known as producer RJD2, was born in Eugene, Oregon, but grew up in Columbus, Ohio, where he met other artists affiliated with the Ohio hip-hop scene such as Blueprint and fellow MHz rapper Copywrite. Through those relationships, he ended up meeting New York City-based emcee/producer El-P and singing with Def Jux in 2002. His debut album, Deadringer, was a flawless masterpiece that put him on the map and eventually catapulted his career to new heights. Currently living in Philadelphia, his most recent project features young emcee STS (Sugar Tongue Slim). Simply titled STS x RJD2, the album combines STS’s Southern “crunk” style with RJD2’s signature production work. The first single, ”Hold On, Here It Go,” was recorded with the Bohemian Dub Orchestra, which balances STS’s (mostly) politically minded lyrics. RJD2 took some time to talk about the project, how he got “discovered” and being a father.

BandWagon Magazine (Kyle Eustice): I think it’s pretty interesting that you grew up in Ohio, considering you ended up on an East Coast label, Def Jux. How did you meet El-P?

I was in this group called MHz, this little indie rap group, from the mid to late ‘90s. We were putting out records, just little 12” inch singles, on this label out of New York called Fondle Em’, which was owned by Bobbito Garcia. Bobbito knew El-P. So that whole New York City rap scene knew each other. I had this demo I was shopping around because I was trying to do a solo record. One of the guys in the MHz group, Copywrite, passed it along to El-P.

Well, thank you Copywrite then.

I had been shopping that demo around forever and had no luck. I approached every single label that did that kind of music so in the mid to late ‘90s, that was like Mo’ Wax, Ninja Tunes; labels like that. I had no luck until the thing with Def Jux just happened.

Oh, well, thank you! I appreciate it.

Obviously you’ve worked with Blueprint and now you’re working with STS, what kind of shared qualities do emcees need to have before you decided to work with them?

I think, number one, a sense of rhythm is the first thing that jumps out to me. I think that’s an integral part of things. In a way, it’s the thing that I hear before the words. Certain artists, even if you don’t understand the words, their sense of rhythm is very, very, very distinct. In the same way you hear Meg White drumming, you immediately know it’s her. For me, that’s the first thing I hear.

They should have a voice that’s unparalleled. You should know it’s them right away. In the press release for the album with STS, it says STS has a sense of humor so that must be an added bonus.

This album is self-released. Is there any fear with not having a label backing you?

It’s obviously a challenge in a way that wouldn’t be if you had a label to turn it over to. But at the same time, there’s an inherent element of luck when releasing a record. You never know if it will resonate with people or not. This is one of those things where I think it’s definitely easier to have a record label release your records, but in no way, shape or form a guarantee that the record will be heard or successful, or anything like that. The benefits of putting out an album by yourself outweighs, at least for me, the risks. I’d much rather be doing what I’m doing now.

Right. You’re in control. And since you’re a father and husband, you have a lot of things going on that often take priority over your career. It’s nice to have an open schedule.

Exactly. You can do it on your own terms and how you want to do it, which is extremely important.

Let’s talk about the new album. What about you and STS gelled and is there a concept for this album?

We didn’t set out to make a record before we had a record. We just started working, did a couple songs and then four or five songs. At that point, we realized we could do an album. I don’t think we decided we were going to do a record until we were eight or ten songs in.

So it happened pretty organically.

Yes. If there is a concept for the album, it’s just try to make 12 songs fit together as best they can.

I don’t think that’s where we’re coming from. It wasn’t anything we thought of. He does what he does and I do what I do. There was no theorizing. You just do what you do.

My first piece for Wax Poetics was on Killer Mike and El-P before they were officially Run the Jewels. He kind of said the same thing.

At a point, I’m not reacting to the fact he’s from Atlanta or lives in Philly. At the very core, you’re reacting to somebody’s artistry.

Speaking of, I listened to the “Good Guy’s Anthem” and as a female,  I can’t really see myself driving down the street blasting a song about a woman’s p*ssy. What kind of audience are you going after here [laughs]?

That’s a great question. I totally see where you’re coming from. I definitely see your point. I think you should ask STS that question [laughs].

RJD2 with Tnertle and DJ Chonz, January 30, at the Ogden Theatre, Denver, 9 p.m. Tickets are $20-$29. Visitwww.ogdentheatre.com for more information.