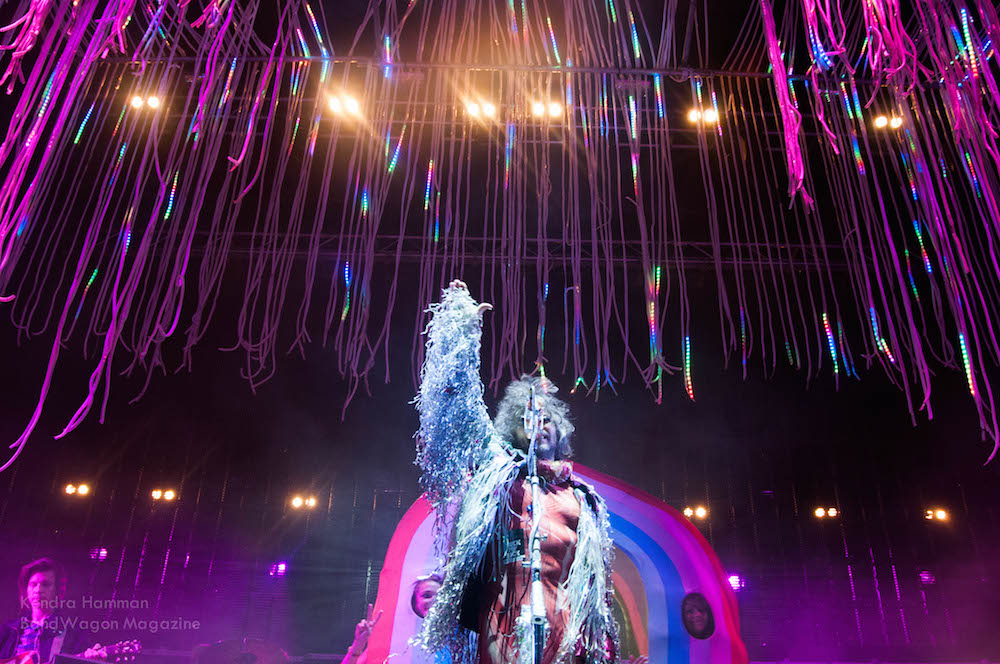 The Flaming Lips first hit the scene as a traditional rock band in 1983 and since then has evolved into a gargantuan entity bursting with neo-psychedelic space rock, confetti and man-sized plastic bubbles. Hailing from Norman, Oklahoma, its larger-than-life front man Wayne Coyne, multi-instrumentalist/vocalist Steven Drozd, bassist/keyboardist Michael Ivins, and guitarist Derek Brown have redefined the term “psychedelic.” (Drummer Kliph Scurlock recently left the band.) They’ve proven to get better with age, and while they may never top the success of 1999’s Soft Bulletin, they are comfortable courageously reinventing themselves. In fact, they wouldn’t have it any other way. 2002’s Yoshimi Battles the Pink Robots was intensely beautiful and did so well, the former Governor of Oklahoma temporarily made the single, “Do You Realize??,” the official state rock song in 2009.

In 2013, the Lips’  released its 16th studio album, The Terror, which completely abandons any formulaic methods of songwriting and delivers something refreshingly unique. It may not be as commercially accessible as previous efforts, but it’s another descriptive chapter in The Flaming Lips’ story. They followed up with 2014’s With A Little Help From My Fwends and also released an EP called Peace Sword. Once again on a massive nationwide tour, which makes three stops in Colorado, Drozd took some time out of his day to talk about Wayne’s “celebrity status” and drug addiction.

I saw you open for STP and Butthole Surfers back in ’93 and then saw you three summers ago. Your style has evolved so much. What do you think is the next chapter in The Flaming Lips story?

Well, we just did a new record and we’re pretty pumped about it. We’re not sure how our fans will feel about it, but for us, we really wanted to do a different type of record, which might not be expected. We’re just kind of buzzing along on that and working up a whole new live show.

How has your live show changed?

We’re not doing the same show you saw a couple of years ago. It’s not as celebratory. There’s no confetti or balloons or that kind of stuff. You saw the pinnacle of that. Now we’re trying different lights on stage, different videos and obviously the music is different because it’s a new record. The question is can we change and mutate into something, but still have an audience? [Laughs] We’re kind of figuring that out right now. It’s exciting, but it’s also a little scary.

Why do you suppose Soft Bulletin is considered your “breakthrough” album?

I don’t think it was because it was more commercially accessible. At that time, in 1999, I think a lot of people had probably written us off as that band in the ‘90s that had the Jelly song. There are so many goofy one-hit wonder bands from the ‘90s, even though we’d like to think we had more depth than that. I can see why people would think that about us. So when Soft Bulletin came out and it wasn’t that post-grunge guitar stuff, I think people were surprised by that. We went in a whole new direction that wasn’t guitar-based rock so much. Whatever energy we got from that album, we took and made Yoshimi, which became the more successful, commercial record and it kind of gave us a whole new career, you know? 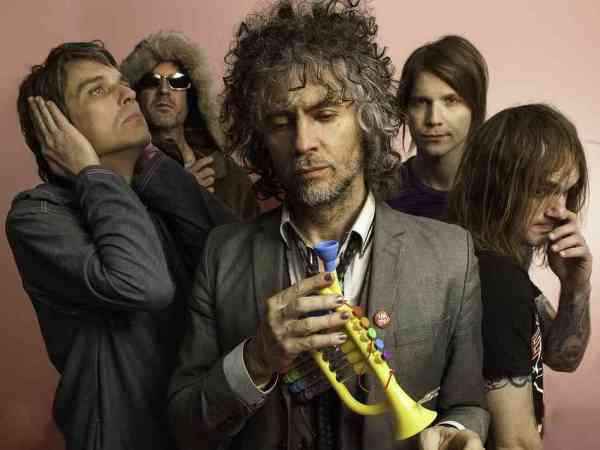 Did you ever think you’d reach such a monumental level of notoriety?

I would say Wayne is in a different category of celebrity than the rest of us. The Flaming Lips as an entity, well, if I was told 20 years ago that one, we’d still be around and two, we’d be anything that anyone still gave a shit about we wouldn’t have believed it. It’s pretty cool. I mean, we’re in a good spot right now. People expect us to do something different. For us, that‘s challenging, but it’s also a relief at the same time.

What was your reaction when you found out “Do You Realize??” was made the official state rock song of Oklahoma?

You know the second part of that story? Where it’s not the state rock song of Oklahoma? Did you hear about that?

No, they took it away from you?

Ok. Here’s what happened. “Do You Realize??” was made the official state rock song of Oklahoma by executive order of the Governor. It was a big controversy because a lot of people thought we were too un-Christian, but anyway the Governor promised us that title in 2009. Well, the new Governor, Mary Fallin, is pretty hardcore conservative and not into us at all. When she came into office, since it was an executive order, she was supposed to resign it and she didn’t. So now “Do You Realize??” is not the official state song of Oklahoma. People are upset about it. A lot of people consider us to be the ambassadors of psychedelic rock for the state of Oklahoma. [Laughs] I’m sure she’ll get around to signing it.

More and more artists I interview admit they are either sober, in recovery and hardly indulge. Is this cliché idea of “sex, drugs and rock-n-roll” dead or on its way out?

I do think it’s on its way out. I don’t think rock-n-roll would have evolved or could have evolved the way it did if it wasn’t for all that. If we didn’t have what happened in the late ‘60s/early ‘70s with drugs and this way of living that was completely free; before people realized the consequences of all this stuff, rock-n-roll wouldn’t have evolved the way it did. With that being said, to me, besides the romantic imagery that you get with Keith Richards nodding off in the studio or Miles Davis being a heroin addict, you know, there’s so many stories besides the romanticism of it. Beneath that, there really is a connection between taking drugs or drinking and the freedom to create. The problem with it is eventually it backfires on you and anyone that does it long enough realizes this. I know from my own experience. I thought I was freeing my mind, anxiety, stress and worry. I thought it was helping me in the beginning, but down the road, it turned in to my fucking worst nightmare. Some of the best music I made was when I was fucked up, but then again, some of my favorite music happened when I was sober. But I really think with the whole sex, drugs and rock-n-roll thing, there is a connection between all of that. To me, The Rolling Stones and Led Zeppelin and all those great, classic bands, they wouldn’t have done what they did, had they not gone through all that cool experimentation I guess you could say. Right now, I’m in a good place. I haven’t been on any drugs or drink for a long time.

It feels really good now. It’s easier to speak about it. If you talked to me in the depths of heroin addiction in 2001, I would have told you that it’s really fucked up my life. It’s a hard thing to give a quick answer to.

Opiates are really awful and I know it really affect your brain chemistry. I think more education might help people understand it might not be the best thing to get into because it really does have a long-term effect, more so than you realize. We’re not invincible.

What people can never know until they experience it themselves is what withdrawal is really like. People say, ‘Oh it’s like you have the flu,’ but to me, the physical part is nothing. The physical part is the easy part; it’s the psychological and emotional part of it. I’ve never experienced anything like that in my life. Opiate withdrawal is so hardcore depressing and devastating that you can’t see the good in anything. You can’t feel the happiness in anything, nothing, when you’re in that state. It’s like trying to describe an orgasm. You can’t know what it’s like unless you experience that. Withdrawals are the opposite side of that. People romanticize about that. They’re like, ‘Oh Sid Vicious, he died when he was really young.’ Um, that’s cool, but maybe the other side of the story could be he lived another 20 years and became some crazy writer dude.

How did you get through all of that?

Well, this sounds like such a hippie thing to say. I really started getting into yoga about six years ago. And I hate to be one of those yoga douche bags, but it’s really changed my life. Today, I did it for an hour before I started talking to you and it put me in this great mind state. I can just sit there and talk to someone instead of worrying about what I’m doing next. I just live in the moment. If you’ve been strung out on opiates for a long time, when you quit, you just can’t even sit still. You’re never at peace. You’re just so full of anxiety. Yoga helped with that. I also quit drinking so I can wake up in the morning and not feel like total dog shit. I have a family, too. I have a wife and two kids now. They’re my whole life. Yeah, I do music as a vocation, but right next to that is my family. That’s all of my time. I’ve got my whole life sorted out.