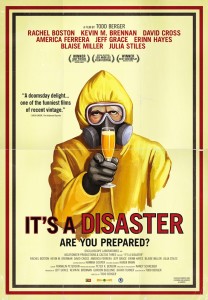 Nothing takes a backseat to couples brunch drama. Not even the end of the world.

It’s A Disaster is set up like any formulaic situational comedy: The awkward new boyfriend. The controlling girlfriend. The sexually open-minded and drug crazed couple, constantly pushing the boundaries of normal social interaction. The married couple who are getting a divorce, but trying to keep it a secret. And you wondering how they ever became friends to begin with. When will it all come to a head? And will they be able to get through it all and still remain friends?

That’s all fascinating and original and all, except for some reason sirens are blaring, the power goes out, cellphones and landlines are down, and the neighbor is running around in a hazmat suit. Apparently biological weapons have been deployed and our gang has to spend the last moments of their lives hashing out their issues and expressing their petty feelings about each other.

And that’s where this movie really shines: in the characters’ whimsical dismissal of the fact that they are all running out of time and clean air, because of course commitment issues and cheating are more important, while every once in awhile getting a taste of their own mortality. It’s like a Ben Stiller flick meets Armageddon.

It’s funnier than that sounds. Honest.

David Cross (Arrested Development, Eternal Sunshine of the Spotless Mind) gives yet another great performance as Glen Randolph, the new boyfriend. With his usual awkward timing and amusing befuddlement he really helps bring this comedy out of the realm of predictability. While the rest of the gang are getting caught up in their differences, he seems to be the only one trying to keep things in perspective. But things aren’t what they seem.

If you’re looking for a romantic comedy with a touching ending and a loveable cast of characters, look elsewhere. This truly is a disaster. It brings to mind Jean-Paul Sartre’s absurdist existential play, “No Exit,” and its main theme: “Hell is other people.”

All the classic goofs are present: I can’t believe she slept with him, while I was sleeping with her, and the goody-goody science teacher (America Ferrera) is now cooking ecstasy on the kitchen floor using sleeping pills and decongestants, with the added flavor of the constantly-gnawing presence of impending death. A lot like spending the most recent end of the world shindig in 2012 with my family. Only there was a lot less homecooked ecstasy.

Julia Stiles (The Bourne Series, 10 Things I Hate About You) plays the uptight counterpart to Cross. She’s really quite good at playing this type of role. You never get a good read on her character though, and she never has you rooting for her. Come to think of it, you’re really not rooting for anyone. Well, I suppose it’s a good thing they’re all about to die then.

It’s A Disaster was written and directed by Todd Berger, who also appears briefly as the overly-prepared neighbor whose invitation to the couples’ party got lost somewhere along the way, making for a fun scene where he explains to the unaware group about the attack on LA while simultaneously making everyone feel awkward for the social faux pas.

What makes this film even more impressive is that the sense of doom and devastation happens without ever leaving the house. All of the panic, desperation, and end-of-the-world-ness happens in the dialogue, through the characters and their (d)evolving interaction with one another. It’s witty, but not pretentious. It’s funny, but dark.

It’s great, but It’s A Disaster.