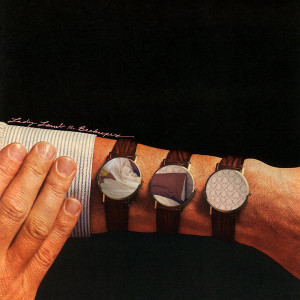 Aly Spaltro comes from humble beginnings. Raised in Brunswick, Maine, Spaltro began releasing music at the age of seventeen. Afraid of the public perception of her music, Spaltro’s first recordings were hidden within the aisles of the local movie rental store for people to discover without her knowledge. Assuming the moniker of Lady Lamb the Beekeeper and releasing her first album on February 19th of this year, Spaltro has traded in her modesty for an all-out musical declaration. Ripely Pine is an album made for playing with volume all the way up.

As the name Lady Lamb the Beekeeper might suggest, there’s a feminine quality to Spaltro’s music, but it’s not without a sting. At once both indie folk and explosive rock, the twelve tracks of Ripely Pine beg to be listened to in a dedicated afternoon session. The album’s first song, “Hair to the Ferris Wheel,” washes romantically over the listener like a warm summer’s day but soon erupts with a force that at first might seem jarring. This is Spaltro’s coy way of telling the listener that Lady Lamb the Beekeeper is no Beach House.

Lady Lamb the Beekeeper doesn’t always have to be loud to convey a message, however. Songs like “Florence Berlin” and “Little Brother” show the softer and smokier side to Spaltro’s voice. The stripped-back nature of the songs allows the listener to experience the retained rage present in Ripely Pine. That bubbling anger gives Lady Lamb the Beekeeper an edge that makes Ripely Pine feel raw and kinetic, guiding the album through a number of massive tonal shifts that never feel out of place when taken as whole. Still, each song shines brilliantly on its own. It’s a balancing act not many modern artists discover, so it’s a wonderful surprise to have Lady Lamb the Beekeeper nail it on her first formal outing.

Most of Ripely Pine was written by Spaltro when she was 18, which might account for its vast emotional range. There is little not explored musically and lyrically on the album and some might wonder if Spaltro has enough material to make a successful sophomore album. But Ripely Pine is a “statement album” and the 23-year-old artist has made her voice heard loud and clear with material that is half a decade old. What Spaltro might do with her experience moving forward is a mystery, but as long as she maintains the same level of enthusiasm there is little standing in her way.