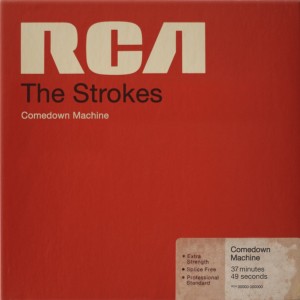 It’s hard to hear an album for the first few times and judge it based on that. With bands with such a strong history like The Strokes, there are so many preconceived ideas floating around in your head: past releases, biases against ‘80s-inspired music, knowledge of the band’s internal struggles. But if you can sit down, turn your brain off with a glass of wine and just soak it all in, you might just find this album to be a gem right away. If not, give it a few plays, you’ll get there.

The album’s first track “Tap Out” starts with an off-putting guitar squeal that leads into a poppy, palm-muted guitar dance. This one is especially fun to me because of how intricate Nick Valensi, lead guitarist, Albert Hammond Jr., rhythm guitarist, and Nikolai Fraiture, bassist, are interacting and playing off each other, while every measure drummer Fabrizio Moretti hits his sticks together for a unique effect. They should play high school dances in the ‘80s; I would totally get off the wall for this tune.

“All The Time” is the second single and sounds much more traditional for The Strokes. It’s two parts catchy to one part simplistic, with a dash of Julian Casablancas’ near-monotonal crooning: the perfect Strokes recipe. “You’re livin’ a lie / Baby, you’re flyin’ too high.”

In “50/50,” it sounds like Casablancas is off the wagon again, with his crackled, garbled yelping. It sounds like he’s once again taken to singing through a 1970s high school PA system, while the rest of The Strokes break it down with post-punk thrashing (which is more like Pac Man going through his punk stage than any kind of serious headbanging). Classic Strokes.

There are a few slower numbers on Comedown, my favorite of which is “80’s Comedown Machine,” which has a very “I’ll Try Anything Once” vibe to it. (“I’ll Try Anything Once” was a stripped down version of “You Only Live Once” with Valensi on an organ keyboard behind melancholic singing.) With a driving synth keyboard and vibrato guitar, Casablancas and the gang take us in and out of the ‘80s, whispering sweet something-somethings into our fully-entranced ears. It’s like slowly drifting down a rabbit hole filled with pinball machines and Ataris.

The album ends with “Call It Fate, Call It Karma,” which sounds like something your great-grandmother would listen to on her wind up gramophone. It’s very strange. The Strokes have always been about putting out retro vibes, but this is senile. It’s kind of soothing, but it makes me wish they would make television in color.

Comedown Machine sounds like Angles version 2.0, but that’s what they said about Room on Fire after Is This It. Personally, I think if you’re on to something juicy, keep squeezing. You can get the highly-anticipated fifth The Strokes album March 26th.

Listen to The Strokes’ new single “One Way Trigger”.