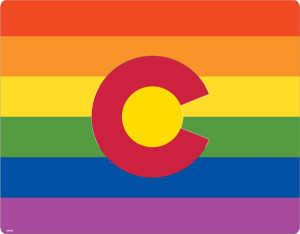 The Colorado House passed a bill Tuesday that would allow same-sex couples to get civil unions in the state, sending the bill to Governor John Hickenlooper’s desk where it is expected to be signed into law. The bill passed by a vote that was close to party lines–all House Democrats voted in favor, with only two Republicans joining, for a 39-26 vote. Democratic Rep. Pete Lee said members of the House “stand on the edge of history,” adding, “For some of us, this is the reason why we are here.”

The bill punctuates a shift in Colorado politics. This is a state that just seven years ago passed a ban on gay marriage (which may be overturned this year, pending a ruling from the U.S. Supreme Court.) But the past few years have seen Colorado becoming more socially liberal, favoring gay rights as well as things like marijuana decriminalization. The civil unions bill is just another sign that Colorado is moving from a red state to a swing state, this election, and potentially to a blue state by 2016.

The bill will become law on May 1. A bill-signing ceremony with Governor Hickenlooper, a longtime supporter of gay rights, is expected later this month.