Trichome’s story is one of reinvention. It is the story of a band that found their sound and made that sound work, but when they reached a crucial moment when it was time for something new, they knew what they needed to do. Where many bands that reach this point flounder in trying to maintain an original concept, Trichome has continued to move into new and interesting places.

Those fans that have been seeing their shows for several years can tell you that the Trichome of 2007 is very much not the Trichome of 2013. Lead singer and rhythm guitarist Evan Daldegan describes early Trichome as “your classic college keg party band until we brought in Matt Schooley to play percussion with us.” Now a band in their eighth year and miles beyond a “keg party band,” last year’s release of Trichome’s self-titled EP introduced us to a group of musicians exploring the world of electro-funk, embracing the synthesizer in a declaration that disco is simply more fun to dance to than reggae.

Trichome began when childhood friends Daldegan and lead guitarist Matt Newhard reconnected after Daldegan spent his high school years in Denver. They jammed and began writing songs, and eventually brought on drummer Jeff Dejohn and bassist Dave Frediani. With this lineup, they gigged around Greeley, developing their reggae set then in 2008, percussionist Matt Schooley joined and that is when Daldegan says the band began to really take the music seriously. “’Schooley,’ as we call him, was a huge part in Trichome’s growth as a band musically. Not only a talented musician, he is amazing at arranging music. He is the conductor, so to speak.” Schooley’s knowledge of music helped the band move in new directions, and then when keyboardist and tenor saxophonist Mike Windham joined, Trichome began to explore creative new places.
By 2009 Trichome could be considered the reggae band of northern Colorado. Playing extensively throughout the region and with some extremely well known acts, Trichome found a success in the genre few Colorado bands have.

“We haven’t performed any of our reggae songs in almost two years… Don’t get my wrong, reggae was good to us. We got to play with reggae legends The Wailers, Groundation, Culture, Eek-a-mouse, and Midnite, just to name a few. But we have fallen in love with a new sound,” says Daldegan. 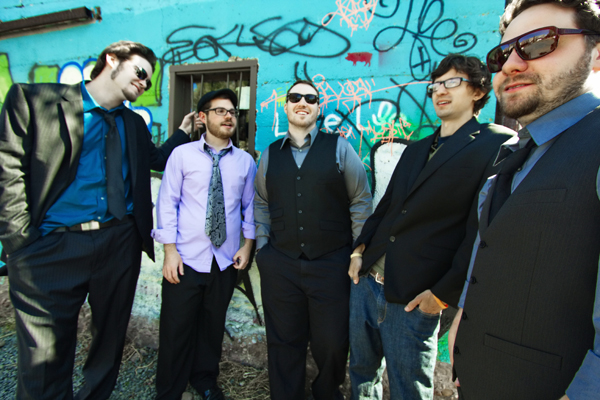 This new sound came from the music they were experiencing at many of the gigs that were non-reggae oriented. Daldegan cites the Summer Camp Music Festival in Illinois and the Wakarusa Music Festival in Arkansas in 2010 as a particular moment for the band when they were deeply inspired by bands they shared a stage with. They decided that they would not be restricted to a few styles of music when they were capable of playing it all.

“We decided to embrace the fact that we can play anything we want. It was a mini ‘renaissance’ for us. It feels good to be able to play any genre from R&B to metal,” says Daldegan, citing bands such as LCD Soundsystem, Umphrey’s McGee, Jamiroquai, Chromeo, and Daft Punk as their current inspirations. This new sound is a disco infusion that feels natural and exciting to the band.

Light years beyond a reggae jam band, Trichome is a true product of northern Colorado music scene culture. Just as the tastes of audience’s have changed over the last several years, Trichome has been a band that has always found a way to stay just one step ahead. Trichome has evolved into a funk electro band striking the chord of a disco revival that is sure to be hitting the Colorado music scene in the near future. It is this evolution that has been the key to Trichome’s success so far.