Colorado mainstay metallers Draghoria have long been a force to be reckoned with. Their latest effort, Dangerous Species, has not only maintained their place on the mountain but have effectively secured their territory at the top.

Draghoria is known in the Colorado community for sheer, sonic brutality, creating an amalgamation of old-school thrash and modern metal held together by forceful melodies, unmatched musicianship, and nods to a plethora of styles that scream (pun intended) pure metal.

The band’s sophomore full-length truly sees each member shine. Lead guitarist Ronald Carillo’s guitar work takes us back to the golden age of thrash, with virtuosic leads likened to the work of metal gods Dave Mustaine, Marty Friedman, and Kirk Hammett’s early work in Metallica and Exodus. (Likely no coincidence, the album art is reminiscent of Megadeth’s 1990 thrash masterpiece Rust in Peace.)

At the record’s forefront are the massive, blistering vocals of frontman Riggs. With lyrical themes complimenting Draghoria’s overall heaviness, Riggs delivers a consistent punch to the gut with impressive versatility. Picture the vocal cords of Testament’s Chuck Billy, Dimmu Borgir’s Shagrath, a growling Ronnie James Dio, and a little bit of AC/DC’s Brian Johnson thrown into a blender together. Douse the bloody, gory result onto the stage like Carrie White on prom night and you’ve got Dangerous Species.

From the driving, double bass kicks of the title track to the brutal vocals of “Deaducation,” the Anthrax-esque shouts on “Terror Hypnosis” and “Murder Nation” to the final crushing note of “O- (Life’s Blood),” Dangerous Species is a massive reminder of Draghoria’s distinction as kings of the metal hill in Colorado.

Dangerous Species is out now. BandWagon Presents Draghoria’s “Unofficial Album Release Party” live at The Moxi Theater in Greeley on Saturday, September 10. CLICK HERE FOR TICKETS. Nate Wilde is the host of Slacker Mornings on 94.3 the X. 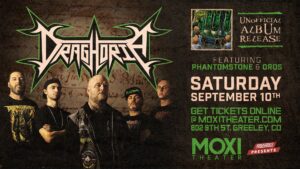