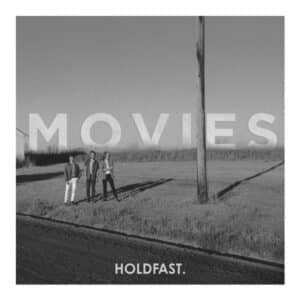 Holdfast.’s new album Movies brings their expected electro dark-pop and rock aesthetic but leans into other styles that open their doors to new fans.

“I Wanted To Live” has a dance groove complimented by rhythmic guitar and synth but hangs on to that dark pop-rock aesthetic. “I’ll Try” plays more into that same sound with chugging guitar and acoustic piano hits. These tracks point to The Resistance era of MUSE influences, even down to Charlie Maddocks’ singing style. He demonstrates a dramatic contrast in dynamics, one that MUSE’s lead Matt Bellamy is well known for, though Maddocks’ tone is undoubtedly his own, quickly becoming one of Colorado’s most recognizable lead vocals. In “Movies In My Head,” Charlie employs a soft and subtly mumbled tone, which completely contrasts the powerful belting he exerts in “I Wanted To Live.” For longtime fans, these tracks hold onto that same sound they’ve had since their days of competing in local battle of the bands events.

Holdfast. stray from those roots a bit on the opening track, “Brother,” a lighter and more commercially-leaning track. It opens with a common harmonic progression pop listeners will recognize and a chorus that begs for a sing-a-long. The second track “Find A Way,” takes a complete left turn into bluesy outlaw territory that lets those founding influences shine through, but more pop-formatted and without the Hendrix-like guitar solos Holdfast.’s favorite bands might use.

Holdfast. continues to deliver strong songs while experimenting with new sounds and textures. No matter where on the spectrum between light pop and dark rock any given listener would prefer, Holdfast. is doing their best to provide each with the soundtrack to their own movie.

Holdfast. celebrate the release of Movies Friday, April 15 with a show at Cervantes Other Side in Denver. Catch them at FoCoMX in Fort Collins on Friday, April 22. Tickets and more at holdfast.band