You think your life is bad? Let’s consider the life of Gov. Mortimer Leech. It would seem that Leech would make you jealous. Leech is eternal, so his nasty coke and hooker habits don’t harm him. He’s a musician, and he lives the lifestyle, partying with Stevie Wonder in Denver, gigging for hundreds of years, getting to be a snarky smartass in interviews with the press. His band, The Widow’s Bane, is still relatively hip, even if they’ve been around for hundreds of years. In fact, with this current revival roots rock phase, you could argue their longevity is a plus, not something to overcome. And yet… 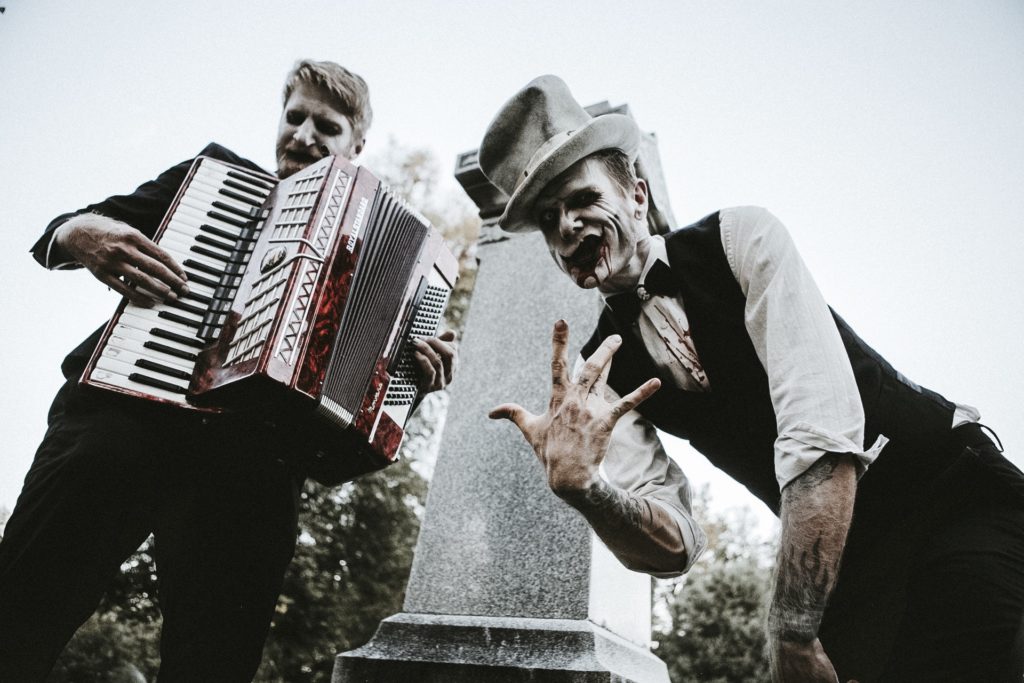 You think your marriage is bad? Leech joined the undead at the hands of his wife, who poisoned him. Leech was then recruited to play on a ship, The Widow’s Bane, a vessel made up of a crew who had all been undone by their wives. This not only explains the unusual name and nature of his band –  it also explains why his band’s eclectic music tends to focus on women and their evil nature.

You think your boss is bad? Mortimer works for the Dark Lord, and though Mortimer doesn’t exactly call him He Who Shall Not Be Named, it’s safe to assume it’s Satan, or whatever name he goes by these days. The Widow’s Bane was the Devil’s ship.

“He’s a hell of slavedriver,” Leech said, and yes, while Mortimer’s dark and quirky sense of humor shows up there, he means it, too. The Devil/Dark Lord demands 90 percent of the band’s wages, and though it’s hard to know what the Devil does with that money, it’s possible he wears Prada. Mortimer’s cool with it, in a way, because the Devil does provide him with cocaine to smoke and with hookers, and that’s what he’d spend his money on anyway since he doesn’t need to eat.

His band doesn’t play much, given that he only agrees to play when the money’s right, and it’s rarely right. The price tag is pretty high, he said, because Satan takes such a big cut of it, and Leech’s ego doesn’t allow him to take cheap checks. 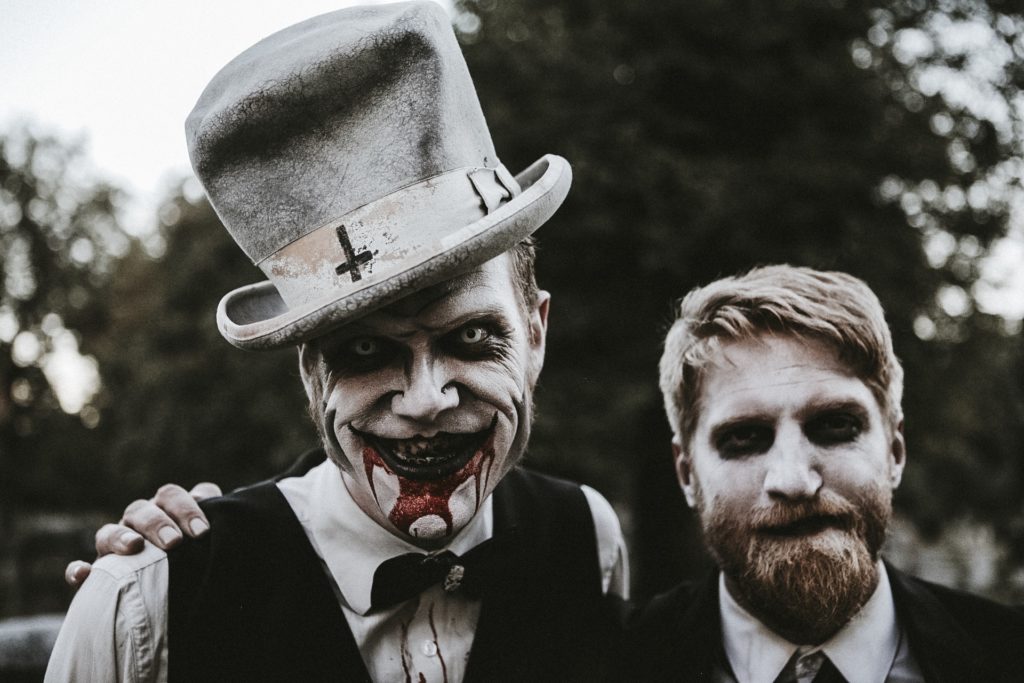 … In case you’re wondering what the hell is going on — see what we did there? — Widow’s Bane is not a joke, nor is it even remotely a parody. It is a legit band that plays real, legit if not unusual music. Yes, there may be some alter egos here — especially in Leech’s case, who admits to having a huge ego — but they are real musicians who have recorded two albums and will soon release a third. They just happen to stay in character the way Johnny Depp method acts, and that means doing EVERYTHING as Widow’s Bane, even the occasional press junket.

Widow’s Bane plays what the members call world music, Leech said in a phone interview. It has a million pieces of influence, which is the only thing you can expect from a band that’s traveled for centuries — the first gig was in 1774 —  and picked up a lot of tricks along the way. Some have called the music Zombie Pirate Polka, and that insults Leech, though he doesn’t mind the Polka description. The music’s very danceable and even gets him moving as well as an undead singer can boogie. It’s the zombie part he doesn’t like. “I am a zombie,” Leech leered, “but why do you have to put it in my genre? Lounge music isn’t called Caucasian Flaccid Jazz.”

It’s Halloween month, and that’s the time people hire Widow’s Bane because that’s the time when undead bands tend to be in demand. They don’t play many Christmas parties. But Leech doesn’t want to scare his audience. That, he said, would be counterproductive. “We can’t help that we’re the undead,” Leech said. “We dress like perfect gentleman. I share my whiskey and my drugs.” And yet…

Widow’s Bane continues to get great reviews, both for the two records and the live shows, no matter how sparse those may be. And all that credibility gives them the kind of opportunities few other zombie bands get these days. They wrote the music for an upcoming production with Wonderbound, a contemporary ballet company in Denver, called Wicked Bayou, based on a Widow’s Bane Song, “Old Bayou,” playing Oct. 20-28 in two Denver venues. The band will release an album of the music they wrote for the production and will perform a proper headlining full-band show at Washington’s in Fort Collins on Halloween night, October 31. 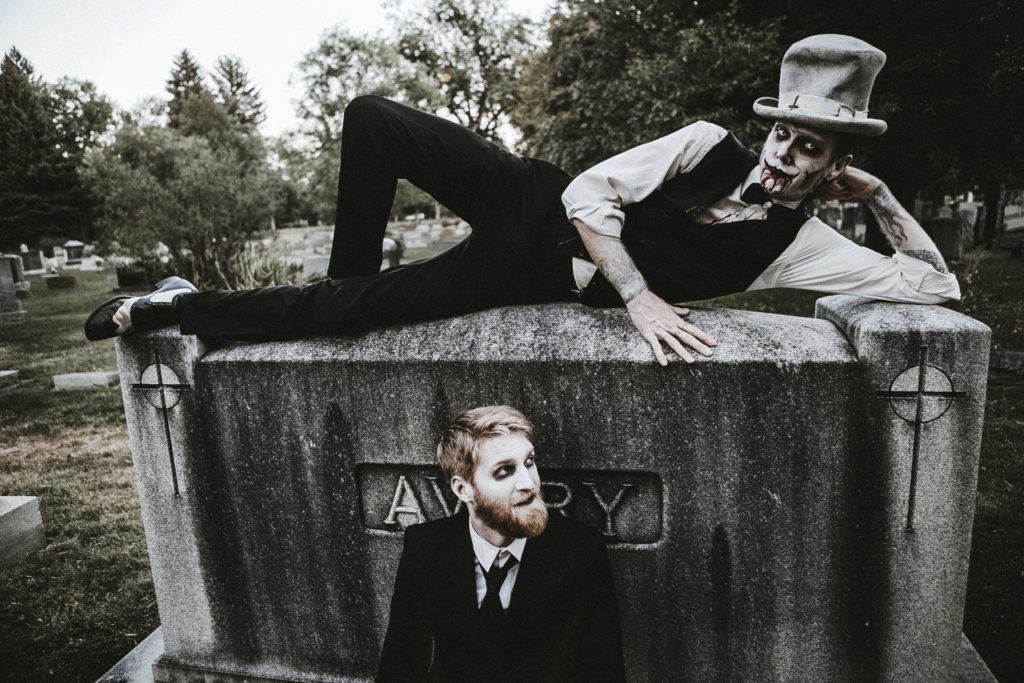 “In a very rare display of humility, I think Garrett Ammon (Wonderbound’s choreographer) is a genius, and I’m very excited to be working with them,” Leech says. And yet … “While I’m sure the majority of the Wonderbound audience will be in attendance to witness my musical genius, I am technically not the star of that show, but rather the Wonderbound dancers and their choreographer, Garrett Ammon. The Washington’s show will be a good old fashioned, Widow’s Bane extravaganza, where I will be in the spotlight, as God intended and free to let it all hang out (figuratively and/or literally).”

Leech may be eternal, but that eternity is because of his damnation. But damnation isn’t as bad as Leech makes it sound. He’s enjoying himself. Maybe that’s a lesson about life: even the worst circumstances, lasting longer than they really should, can offer some good moments. Perhaps life isn’t so bad at all, whether you’re dead or not. As the late Gov. himself put it, “the afterlife is a never-ending party.”