“Most ‘magic’ sucks,” Paul Noffsinger says. In our interview with the magician and member of The Mystery Collection, this stuck out like a joker in a stack of spades. Noffsinger returns to The Moxi Theater on August 23 to perform a show called Unreal. It’s a showcase of unexpected, bigger, more involved routines that he can’t do in the smaller venues and private house shows which are his bread-and-butter.

“It’s true,” he continued. “Adults do not like to be made to feel stupid, and most magicians are ‘tricksters’ that are there to fool and trick. Magic sucks. Why does a magician cut a woman in half? I don’t know, because he can? There is no story to it, there is no magic, there is no real belief on the audience’s part, that the woman is in danger.”

Noffsinger said he wants to take audiences on a little adventure to forget their biases against what they already know regarding magic shows. For 90 minutes, audience members get to hear stories, see haunted relics, and be part of something really special.

“It is hard to define what I do,” he said about his performances. “I have been referring to it as ‘mystery entertainment,’ but it’s really a mixture of magic, mind reading, predictions and storytelling. Every bit in my show has audience participation and more often than not, the ‘magic’ happens as a result of the decisions and efforts of the spectators who are not under my ‘power.’” 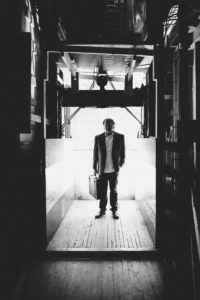 Noffsinger got the magician bug as a kid; doing card tricks and putting together routines for friends and family – even performing at kids’ birthday parties. He eventually put away his magic stuff as he got older, only rediscovering his love of the craft while cleaning his home in anticipation of the birth of his daughter Lily, now age 12.

“We found my box of magic and spent the entire day working through the routines and tricks from when I was a kid,” he said. “I was immediately hooked again.”

He would eventually end up quitting his 18-year career in finance to pursue magic full time. Noffsinger started writing a show right after quitting his job and within a couple of weeks had a few published routines in magic journals and had a product in development with one of the most popular prop makers in the business.

“I had been invited to perform at a convention for Seance Workers, Ghost Tours Guides and Story Tellers in South Carolina, I was asked to consult on America’s Got Talent and Penn & Teller Fool Us.”

He would also go on to be one of the founding members of the Society of American Magicians Assembly 292 in Greeley. yet, despite this love of magic, Noffsinger says, when performing, he tries to not be a magician per se.

“I am more of a facilitator, a guide for the evening,” he said. “I am a storyteller. I love talking and sharing stories. One of my favorite reviews of the show said, ‘I would pay the ticket price just to hear you tell those stories.’  People coming to my show for the first time can expect great stories, terrible jokes and some very entertaining mysteries. One of the best compliments a performer can have is return audience members.”

Noffsinger said that there will be no bunnies from hats, no disappearing barely dressed ladies and no “pick a card” tricks at his Moxi showcase on August 23.

“I hope when an audience member leaves my show,” he said, “they have been part of something they have never seen before. I hope they feel a little differently towards what they believe is impossible.

“I want them to forget their worries and troubles and remember what it was like the first time you saw a tadpole or shooting star – that was magic.”