“Straight Shot,” the lead single from DeVotchKa’s forthcoming release This Night Falls Forever, takes both citizens of “Old Denver” and global fans of the pioneering Gypsy-Folk band “right back to the good times – before the paperwork got signed.” After years of soon-to-be-released announcements, the album finally arrives this August 24. Fans of DeVotchKa’s more lyrical, hook-based work can finally rejoice in all its cooing, gypsy splendor.

With humble beginnings as a burlesque backing-band in the late 90’s, DeVotchKa have now released five studio albums (This Night Falls Forever will be their sixth) performed annual Colorado Symphonic Orchestra collaborations at Red Rocks, and scored high-profile films Paddington, Focus, and most notably the Oscar-winning Little Miss Sunshine.

Singer / Ringmaster Nick Urata said to us recently “when I first started putting our stage show together I was always careful to leave the door open for any other art forms that wanted to join in. As our music developed, so did the variety of offers to collaborate.”

This open door led to collaborations as various, odd and wonderful as a Willy Wonka live-to-film performance at The Hollywood Bowl with Weird Al, John Stamos and the kid from Stranger Things.

“We have been extremely lucky in attracting so many great collaborations,” Urata says. He admits, however, “with the benefit of hindsight, we now see that it took us away from finishing our album. We can only hope that the projects we have done will somehow find a way to influence our latest music.”

Pulling from a multitude of global influences indeed, their first studio release as a band since 2011 is expectedly macabre and atmospheric, though they slink a new, pop-formatted edge into the album. Still rife with all the danceable tangos, tarantellas and Transylvanian gothic mystery you’d expect, its rolling world-music beat meshes Urata’s most clear serenade in years with their touchstone cinematic world-music flair.

Heavy, almost trip-hop beats drive the track “Let Me Sleep,” evoking a Baz Luhrmann-esque film sequence, while “Lost You In The Crowd” begs: “I wish we could stay frozen in this moment – where you and I could drink up this night,” pulsing along with snare-rolling build, invigorating listeners with flourishes of starry-eyed optimism.

But staying frozen in time isn’t what’s happened to DeVotchKa’s home base of Denver. “The place itself has greatly evolved,” Urata says. “Of course that affects the music and the art. It’s always hard to see the town you love go through changes but I always knew from the time I got here that Denver has been in a constant state of change since it’s early days of the Wild West.”

That “Wild West” influence comes through strong on “Done With Those Days” and closer “Second Chance” which hit us with the classic Spaghetti Western whistle Urata is known for – an icon of the gothic folk scene from back when Andrew Bird was merely a Squirrel Nut Zipper. Those “old days” had a truism which Urata contests is still existent Denver.

“The one constant thing, the thing that attracted me and my band (to Denver) is the creativity this place inspires. No matter through boom or bust, there has always been something interesting happening here.” Crediting the city itself as the creative impetus for Jack Kerouac’s iconic On The Road character, he hails: “This is the birthplace and the stomping grounds of Dean Moriarty! Think of how many lives that guy inspired.” 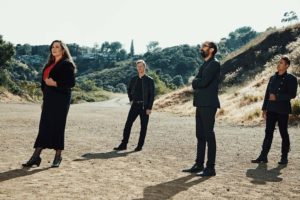 This historic western influence continues in “Break Up Song” with the dirge-y drama of reverb-drenched, drop-tuned cowboy guitar setting fire beneath Urata’s pleading vocal. In classic form, his voice vampires it’s way through the fog with a delivery as deep and dramatic as Danny Elfman’s Pumpkin King.

On “Empty Vessels” and “Love Letters” we hear LA rock-band studio touches with kicking drums akin to latter-day U2 or even Interpol, likely due to half the record being made at Capitol Records in LA. Still, the other half of the album was recorded at Greeley native Colin Bricker’s Mighty Fine in Denver, and their identity remains strong and unique.

Grown and seasoned though they are, DeVotchKa haven’t forgotten their burlesque backing-band roots. Urata sings “somewhere back in your memory there’s a younger, prettier version of me. That’s the message I want to transmit, that’s the boy I want you to go home with. Yes, I’m still in love; are you still in love with me?” With This Night Falls Forever, we most certainly are.