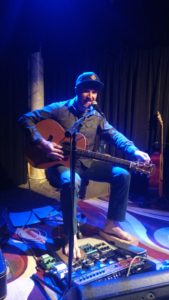 John Adam Smith is a one man band whose smooth and raspy vocals accompany his guitar in a captivating way. His looping skills and homemade stompbox allow him to focus on the melodies and intricate stylings he plays on his slide and acoustic guitars, while singing his all original self-written songs. His voice recalls Paul Simon with a Trevor Hall style, and his sound is huge, creating the illusion of more instruments than seen on stage. Intimate, heartfelt, gracious, and warm, one can sense that Smith is happy and comfortable on stage with any crowd. “I am just really excited to come to Fort Collins and share my stories and music with you all,” Smith said in a pre-show interview. “I am in the process of trying to put together a new full band and seeking the right musicians and friends to do so with.”

At Avogadro’s Number on January 25, Smith played to a small crowd of friends, old and new, and a cousin he hadn’t yet met, with a second cousin on the way. “How many people can say they met their cousin at their show? This is incredible!” Smith exclaimed from stage after a set break where the familial ties were discovered. The show was mellow and melodic, soulful and funky, downtempo and ethereal. With a small candle lighting the merch table, one could find the 2012 self-produced and recorded full length studio album Ponderosa Skies, a collection of songs Smith started writing and composing at the age of 16, and business cards with a free download.

Smith first picked up the guitar at age 10, and by 15 he was performing original songs in front of live audiences. He said, “I was first drawn to [West African] music at a drum and dance class in Missoula, MT, when I was a teenager. From there I was so intrigued by it that I sought teachers around the U.S. and it became a huge part of my life and influenced my songwriting and guitar work. I started a drum and dance troupe in Missoula called Djebe Bara with a close group of friends and they are still performing and providing drum and dance class in Missoula every week…  ‘Djebe’ is one of the original words for Djembe music and it means ‘to bring people together’.”

Bringing people together is easy when listening to Smith’s songs about, “Life and all of its ups and downs and the challenges that it brings to us and the ability to stay positive and power through the hard times. Embracing the darkness but striving for light. Love. Heartbreak. Community. The mystery of all of this together is really what inspires my songwriting. I live for music and to connect with people through music. I feel like it creates common ground and makes sense of intense emotions when other forms of communication fail to do so.”

Smith recently moved to Denver, inspired by friends in Elephant Revival and the burgeoning scene in Colorado. He was very excited to be in Fort Collins for the first time and said, “I came for the opportunity to share my music and my story and to try and share some positivity. It was also just a new beginning for me. A very important relationship in my life came to an end in the beginning of 2016 and I came here to start over in a lot of ways.”

Life’s journey has inspired Smith as a musician and a storyteller, and he will continue sharing his take on it. Take some time out of your day to enjoy his creativity on Spotify, SoundCloud, Facebook and at johnadamsmith.com.