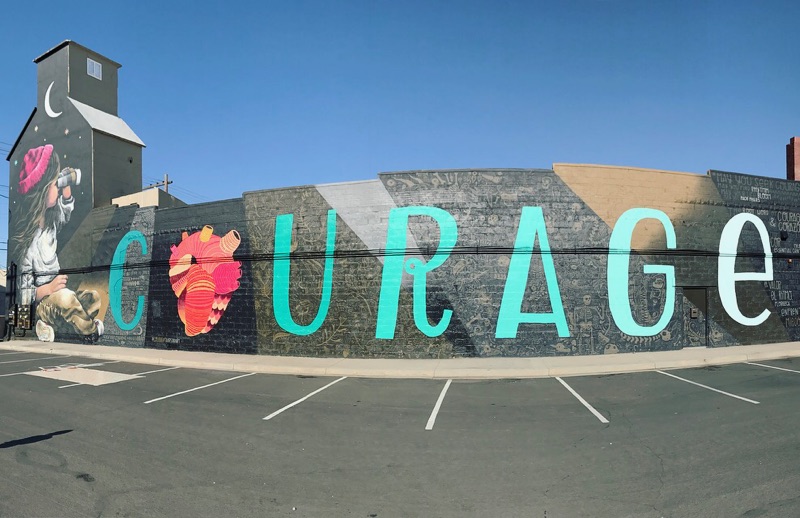 FRIDAY, MAY 26 – Greeley mural artists Armando Silva and Wes Sam-Bruce held court at the dedication to their new mural, “Courage,” at 8th Avenue and 7th Street. This is the first time Silva and Sam-Bruce, both responsible for various mural around Greeley, have ever collaborated on a project. The mural prominently showcases the word “Courage,” with the “O” replaced with a heart, and up the tower of the building is a little girl with binoculars looking out for smoke (as the building was once a fire station).

“Wes has been exploring courage for some time now,” Silva explained, “as far as his work goes, and it just so happens that I’ve been exploring the symbol of the heart. How it’s a thing we all have, to have life, it’s something we have reference to. We dug deeper into these two things, and we find that they actually have a common root. So we decided to go from there and grow from that.”

The project was put up by the Greeley Art Commission and the Downtown Development Authority. “We got to give them props,” Silva said. “Without them giving us the Jedi power to go and do this, it wouldn’t happen the way it did happen. It’s the biggest project I’ve ever been a part of right now, and I’m happy I did it with [Wes].”

“All Purpose Rental really hooked it up with getting us the lift and the boom,” Sam-Bruce said, “From the people in the neighborhood to the DDA and the city to make this partnership, so many pieces in that pie were there to make this thing happen, it makes sense the thing to be like this, to give back to the city.”

“Which is why we wanted to do this,” Silva said, motioning to the party in the parking lot. “To be like, ‘you guys enjoy it.’”