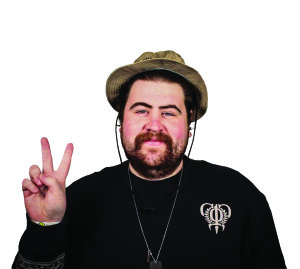 Everyone finds comedy in life. For Patrick Richardson, comedy is found in the act of living–and the funny shit that comes with it. Already having a prominent presence in both hip-hop and short films, he has been making a name for himself within the comedy scene of Northern Colorado. Recently we sat down with Patrick and asked him a few questions.

What drew you to comedy?

I started doing comedy in January of 2014. I’ve always enjoyed being on stage, and I’ve always loved making people laugh. Stand up comedy was a perfect marriage of those two things. I haven’t looked back since.

How are you using comedy to impact your community?

Comedy disarms people. Humor is biting; it’s the best way to deliver truth. The greatest kind of jokes don’t just draw a laugh, they bounce around in an audience’s mind, there’s a lingering aftertaste of truth. I have no delusions of where I am now. I’m far from getting to that place as a joke teller, but I’m striving to get there. Good stand up comedy promotes honesty. I’m trying to make my community a more transparent place through comedy.

What is the funniest thing that has ever happened to you at a comedy show?

I was doing a show in Denver and this tiny old Vietnamese woman entered the room and sat in the front row. She heckled the comics throughout that show, but my favorite line of hers was something like, “I hate the post office! Amazon Prime number one! Free shipping, even on Sundays!” She then stood up and gave the headlining comic, Mitch Jones a quarter and slowly shuffled out of the room. No one in the room knew how to react to this strange old lady. I couldn’t stop laughing. It was such a real and bizarre moment.

What is the funniest thing that has ever happened to you?

Life is so wacky. I can’t pick one moment. But I was driving home from Boulder with a couple of other comics about a month ago and I hit a cat with my car on the highway. It was horrifying. I was so bummed, but we couldn’t stop laughing at how ridiculous the situation was and how exaggerated the thud of the cat hitting my car sounded. It was traumatic. Those are my favorite moments–when laughter helps you cope with the garbage life throws at you.

What is your favorite kind of joke?

My favorite kind of jokes make me feel connected to humanity. Jokes that face life’s harsh realities head on. “I’m scared, you’re scared. There’s nothing we can do about it, so we might as well laugh about it. It’s all we have.” That type of joke.

I tune out any joke that’s racist or sexist. There’s no room for hate speech in the comedy scene I want to be a part of.

What is your favorite color?

Sometimes stuff and things. But how does that make you feel?

It depends on the day.

What is the meaning of life?

I don’t think there is an inherent meaning to life. You gotta find it yourself. Purpose is the antithesis of existential dread, fam. I read that somewhere, and it’s the truest thing I’ve ever heard. Listen more, admit when you’re wrong, don’t give up on doing the cool shit you wanna do and stay human. Love is real.