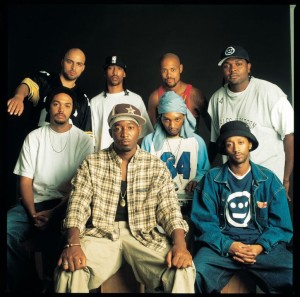 Good news has descended upon the hip-hop community: not only is the entire Hieroglyphics crew reunited for a tour, but they’re bringing Del the Funky Homosapien along with them. It’s only fitting considering he is one of the founding members of the prolific Bay Area hip-hop collective. Along with Tajai, Pep Love, A-Plus, Opio, Domino, Phesto, and DJ Toure, Del has become an icon in the underground hip-hop world. The Hiero logo itself has become one of the most recognized symbols in the industry and helped propel them forward as a group. After 25 years of touring and recording, the Hiero crew is going strong, a rarity in the often fickle world of hip-hop.

“We’ve always stayed true to who we are,” Tajai says. “I think sticking together and sticking to the script to stay original has given us longevity.”

As a crew, they’ve released just three studio albums, including 1998’s 3rd Eye Vision, 2003’s Full Circle and 2013’s The Kitchen. Tajai, Opio, Phesto, and A-Plus, however, teamed up for a Hiero offshoot, Souls of Mischief. The group’s seminal album, ’93 Til’ Infinity, has lived up to its name and is a timeless piece of music, featuring classic songs like “Make Your Mind Up” and the title track. While the guys have grown older, their lyrical content hasn’t changed much. On 3rd Eye Vision, they tackled some pretty heavy subject matter such as gang warfare and the global pharmaceutical trade, and still dive into some complex issues.

“Maybe our perspective has changed over the years because of maturity,” he says. “But not what we’re talking about.”

Tajai, who prefers to do most of his writing in the car, often pushes outside his comfort zone, creatively speaking. Most recently, Souls of Mischief teamed up with revered producer Adrian Younge for 2014’s There Is Only Now, the group’s sixth studio album. It was an all analog recording with a live band and a producer with a vision.They had to craft each song as they went along in order to make the album sound as cohesive as possible. As their unmistakable voices spit thought-provoking lyrics over Younge’s soulful production, the album tests the boundaries of what most contemporary hip-hop artists do these days, something Tajai finds nothing short of comical.

“It’s really crazy that making actual music is revolutionary in this time,” he says. “‘Oh I play instruments and make music’—what a novel concept for a musician. It’s kind of crazy that that’s how far we’ve fallen in regard to our musicianship in one generation—literally. Our parents’ generation grew up with all people that played instruments, sang and composed. That would produce something like a Prince, which is probably someone between our parents’ generation and now. Now when we get guys that can play music, it’s an anomaly.”

He notes that a lot of schools have cut out music programs and, in general, pursuing a path in music is an expensive habit. It’s, however, much more possible because of technology. We also live in a different time, one where music blogs and magazines pay way too much attention to gossip about the Kardashians, Kanye West or Taylor Swift than the actual music.

“That’s the sad part about the music industry,” he says. “It’s a funnel and the funnel is basically run by or controlled by these taste makers that have bad taste. The funnel is just because you gotta give people what they want and whatever’s popular is what they want. I can’t fault them, however it doesn’t help music at all. It just perpetuates bullshit, really.”

The Hieroglyphics and Souls of Mischief crews have, thankfully, never caved to the pressure of straying from what makes them innovators in the first place. The music they make is necessary in a world full of Drakes and Lil’ Waynes. At the end of the day, Tajai understands it’s about balance.

“There are still people that are really about music,” he says. “They’re the kids that are in the crowd at the shows, so music matters to some people, but as far as magazines, music doesn’t matter to the fucking magazines. Like if something else made them make more money, they’d write about it. I don’t take that personally. It’s just a job. You can’t be mad that people who sell donuts aren’t pushing fruits and vegetables. Donuts are good, too.”

Hieroglyphics with The Reminders and Qbala, March 25, at The Aggie Theatre, 204 S. College Ave., 8 p.m. Tickets are $22/ADV and $25/DOS. Visit www.aggietheatre.com for more information.