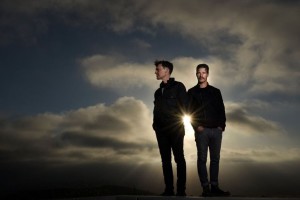 El Ten Eleven isn’t the typical “post-rock” band. They don’t have a singer, aren’t aided by a laptop and the music is entirely instrumental. Core members Kristian Dunn, who plays the double neck guitar, and drummer Tim Fogarty formed El Ten Eleven in 2002. They began gaining notoriety after some of their songs were used in documentaries like Helvetica, Objectified and Urbanized. Their self-titled debut was released in 2004 and drew comparisons to artists like Sigur Ros and The Mercury Program. In support of their most recent album, Fast Forward, Dunn and Fogarty are back on the road. In this candid interview, Dunn opened up about his wife’s struggle with alcoholism and how he learned how to play his instruments.

BandWagon Magazine (Kyle Eustice): Where did you learn how to play guitar?

Kristian Dunn: I’m really a bass player and I learned when I was 13. I just started taking lessons. The guy teaching me was actually a really good guitar player, but after a year or so I was actually better at playing bass than he was. Then I just kind of had to teach myself. This was before the internet so I would just listen to my favorite records and try to figure stuff out. It was pretty hard. So I’ve been a bass player this whole time until El Ten Eleven when I decided to try to play the double neck. I thought I would just play the bass line, loop it, play the guitar part, loop that and play the high bass part on the other. But when I was messing around on the double neck, I figured out I could use some techniques to play them at the same time. Nobody taught me. I had to teach myself. Necessity is the mother of invention.

That’s how I learned, too. I read somewhere that you are on the fence about the use of laptops in live bands. You said it could be done if it’s done well, but most people don’t do it well.

Yeah, that’s pretty much how I feel. We don’t use them at all. Everything we do is live. I think that’s part of why we’re succeeding. People aren’t excited about going to shows anymore. At least, not like they used to be it seems to me. I think part of it is because it’s just boring. Why would you pay somebody to lip-sync? That being said, some of our favorite artists are electronic artists use laptops, but they do it well. To me it seems I find myself excited when an artist either dives 100% into the laptop/electronic world and does things within that world or is 100% organic without them. It’s when I see a band or something that has a bass player, drummer, guitar player and a singer, and there’s a laptop they try to hide. That’s when I’m kind of like why? This seems like cheating.

I’ve seen lots of tracks mess up, too. It’s awkward.

Everything drops out. I saw The Motels. It’s a long story, but I’m kind of friends with the singer. She’s incredibly talented. She had a three-piece band behind her, they came out and they were all looking at each other and shrugging their shoulders. I was like, ‘What are they trying to communicate?’ It sounded great. Between the first and second song, there was a bunch of running around. What had happened was when they were playing the first song, the laptop wasn’t working. I swear it sounded better without it. It sounded emptier, but they were forced to be real.

It’s worse in hip-hop. You could easily throw an emcee on a lot of your tracks and it would probably work out just fine, especially your album, Transitions. I’ve heard some solid beats on that record.

Thank you, yeah, a lot of people will actually use our music and do mash-ups and put raps on top of it. It works really well. I love it.

Speaking of Transitions, I read that both of you were literally going through some pretty big changes during the making of the album. Have things smoothed out?

Tim’s divorced, but he’s stabilized [laughs]. I’ve remarried and had a child so that’s a lot of what that’s about. So it wasn’t all negative stuff. It was crazy. It was a roller coaster of a couple of years there.

I bet. I guess that’s what life is all about. I’m happy you got some great music out of it. Without pain, there wouldn’t be art.

It’s true. A lot of great art does seem to come with pain, sadly.

Do you feel artists have any sort of responsibility when it comes to what they put out into the world, especially now that you’re a father?

Well as a father, yeah. As a band member, I don’t know if I have a responsibility, but it’s inevitable if you’re in my position, you can influence younger people and their thinking. I’ve heard some artists say, ‘Well I’m not a role model. I never asked for that.’ Well, yeah actually you are. Even though you didn’t want to be, you are. You may not want to deal with that, but you have to know that you are. I mean, my wife has been sober for six years. We have a song on Transitions called “Thanks Bill.” It’s in reference to Bill Wilson, founder of AA.

Oh I know what you’re talking about. I have almost 10 years. I went through my own struggles and learned the hard way what I can and cannot handle, which is apparently nothing [laughs].

That’s really interesting that your wife went through that, too. What made you decide to do that track?

Well, she was an inspiration for sure, but that really is a thank you to Bill Wilson for founding AA. AA works really, really well for my wife and continues to work well for her. She goes to meetings and she’s thriving. I feel very emotional when it comes to Bill Wilson because he invented something entirely selfless. He made no money from it and it continues to be free. I get emotional when I think about that guy. I think how if it wasn’t for him, we probably wouldn’t be married or have a kid.

That’s such a cool story.

We were together years ago when she wasn’t sober and we basically split up because of it. One of the main ingredients was her alcoholism. Now that she cleaned up, we were able to get together. Now we have the best marriage ever and have a kid and we’re super happy. I feel very grateful for Bill Wilson.

I could see how that could easily tear some couples apart. It’s very cool she is so committed to it and even cooler that you made a song about it.

I think a lot of bands hide behind their lead singers and the musicianship is lost. I think it’s amazing that you’re strictly instrumental. Was that the plan from the beginning?

Yeah, only because I can’t sing and Tim can’t either. Honestly, if one of us could sing there would probably be vocals.

I can sing. I’ll shoot you some vocals on Garage Band [laughs].