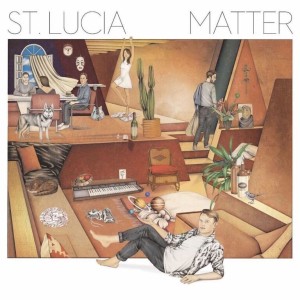 Synth-pop band St. Lucia, created in 2012 by South African native, Jean-Philip Grobler, have just released their second studio LP, Matter. The sounds blended together in the tunes by St. Lucia are a creative twist of Grobler’s love for R&B, ‘80s pop, and alternative rock. Matter has been one of the most highly anticipated albums since the single, “Dancing On Glass,” was released in early November. The song full of synth beats and electric drums, though topping the Alt Nation charts for many weeks, is strangely anti-intellectual with lyrics such as, “How long ‘til we learn dancing is dangerous,” and surges with a familiar spontaneity. By the time you reach the fourth song “Physical”, you’re already enervated with the album. Though the beat of the song is exhilarating, the lyrics are annoyingly repetitive as a good portion of the song is Grobler yelling “Phys-Phys-Phys-Physical,” at the listener. The song builds layer upon layer creating a richness not quite in depth.

St. Lucia were signed by Neon Gold, the label that broke Passion Pit and Ellie Goulding. They signed the band in 2012 and released their first EP and LP, the latter under a relationship with Columbia Records. While St. Lucia have close ties to Passion Pit, the band that hangs gargantuan over the entire discourse of synth-pop for the last 10 decade, you can see how Grobler tries to follow their pattern in all the excess in Matter. In the lead track, “Do You Remember”, the song sets an ebullient keyboard loop against roaring synthesizer blasts like the vibe other St. Lucia songs desire. It is a chanting hook shifting between a few pitches, an expression inspired by modern pop radio. Now we move onto the six and a half minute track, “Rescue Me”, an amassed and somniferous addition to the record. This song feels endless, with no sense of idleness; it is a postmodern march through recent pop history.

For the snapping, slow jam “Love Somebody”, the band teamed up with Jack Antonoff, the founder and lead vocalist for indie-pop band, bleachers, to write the song “Help Me Run Away.” Listening to this song is almost comedic as the influence of Antonoff entirely masks the sound of St. Lucia themselves. This song is a party anthem that that turns out to be a call of despondency, especially in the lyrics “Thought I was living under cover / Now I’m a child, child without a mother,” and “Who was a stranger to the American Way / But now I’m fully ingrained to toe.”

Matter is an album that posses a powerful misplaced optimism. It uses touches of early 2010s house music and ‘80s synth allure. While it’s full of big drums and memorable hooks, it gives an undertone of dissatisfaction that is new to the band. All the songs in isolation might be gratifying, but together is inordinate. As a fan of St. Lucia who has enjoyed the lively, awe-inspiring sound of Grobler’s debut EP and LP, I am left here in slight discontent. Each song is honorable on its own, but creating such a diverse sound throughout the album was disorderly and tiring.