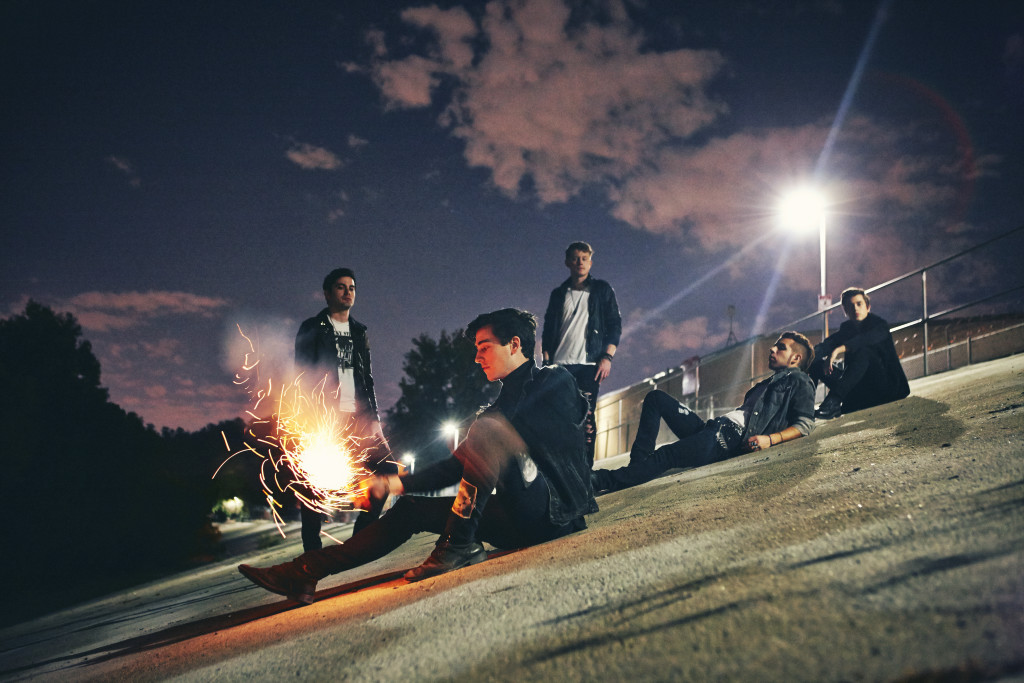 Night Riots singer Travis Hawley is riding in the back of a van to his next tour destination and hitting every bump on the road, his “least favorite” part of touring. With a staggering 10 hours to go, he will presumably keep himself busy checking his Facebook, Instagram and other social handles we all rely on as a way to pass the time. It’s something he’s become accustomed to doing.

“We calculated recently that we have only been home for a grand total of one month this year,” Hawley says. “The rest has been spent in Los Angeles recording or driving around the U.S. and Canada in busses and vans or flying around the country. My favorite part is playing shows, meeting people and going new places.”

After all, Night Riots—Hawley, guitarist Nick Fotinakes, bassist Mikel Van Kranenburg, guitarist Matt DePauw and drummer Rico Rodriguez— have been on the ride of their lives since emerging out of San Luis Obispo, California in 2011. Hawley’s background goes a bit deeper, having spent many of his formative years in his home country of England.

“Being born overseas and spending time in the U.K. greatly influenced me as a person and possibly lead to influencing my musical tastes,” he says. “I think it mostly just gave me a different perspective of the scope of things that I would have not seen. It also left me in a love affair with gloomy weather and a subtly warped way of speaking.”

It’s ironic his path would take him to one of the sunniest places in the United States. After meeting his bandmates, they quickly got to work writing music, recording and playing shows.

“We were friends first and always played music together as a mutual hobby,” he says. “I couldn’t imagine being in a band or playing music with anyone else on the planet, let alone people I didn’t know or necessarily like. Being in a band means you are in close proximity for months, years on end so understanding and feeling connected with the people you are with is incredibly important.”

Initially called PK (inspired by the character PeeKay in Australian author Bryce Courtenay’s novel The Power of One), they decided to change their name to Night Riots in order to eliminate any trademark concerns, which Hawley says gave them a chance “to recalibrate and choose a name that we really felt represented who we are and the art which we create.” According to the band, it represents its darker side, as it “explores the deeper aspects of music with varying tempos and somber, haunting melodies juxtaposed against uplifting choruses.”

Currently on the road in support of its latest EP, Howl, Night Riots is just beginning to see the light of day as their fan base expands and they introduce the world to their hauntingly beautiful brand of music.

“We put everything we are into our music and can only hope that it will be received positively,” he says. “We have been blown away by the response Howl has gotten.”

Night Riots with Silver & Gold, Racing on the Sun, December 13, at Moxi Theater, 7 p.m. Tickets are $10 or $50-$100 for reserved tables. Visit www.moxitheater.com for more information.