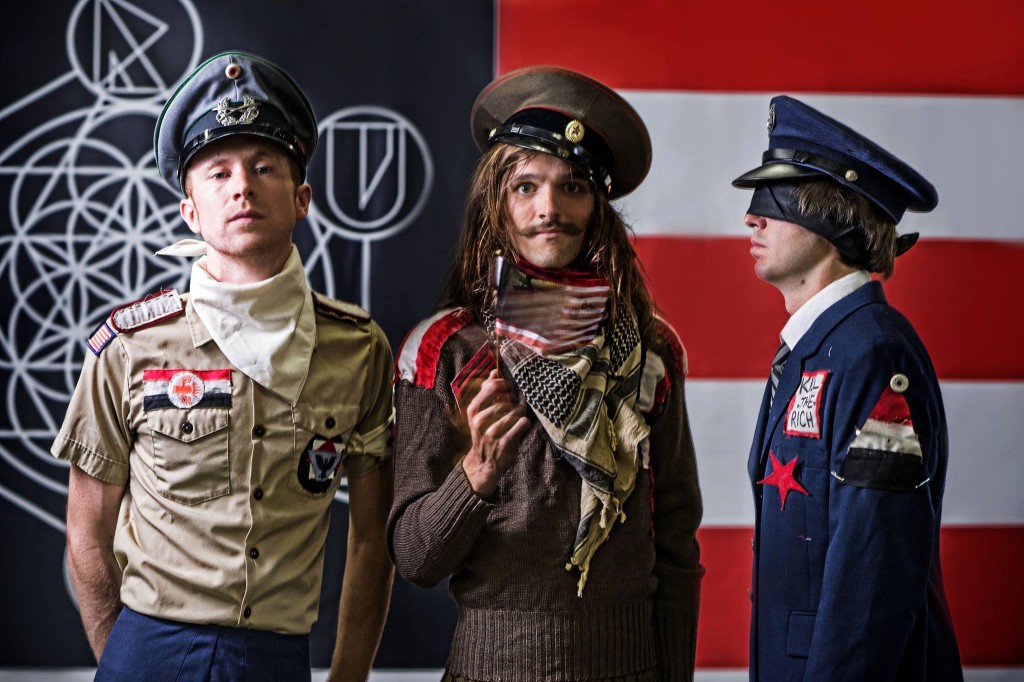 Epiphany can come in a myriad of strange and unexpected ways. In the the 1978 Superman film, Lex Luthor pontificates that “Some people can read War and Peace and come away thinking it’s a simple adventure story. Others can read the ingredients on a chewing gum wrapper and unlock the secrets of the universe.” In the case of Kyle Gray, epiphany came in the form of a spiritual journey across America, on foot, in the style of the great and enigmatic Werner Herzog, the striating stipples of America’s starscape his gum wrapper, the band he would come to form his universe’s secrets. With roots in free jazz and newly energized by his cross country travels, Gray joined with fellow musicians and high school mates, Alex Raymond and Gregg Ziemba to create the fun loving musical adventure that is Rubedo; it’s name, a tip of the hat to a long retired alchemy process, infuses the project with notes of progress and evolution. I had the pleasure of stumbling across their newest record, Love Is The Answer, a raucous and relentless tumble down the Rubedo rabbit hole.

The first sound you hear on Love Is The Answer is a pulsing electric whir and humming amp, encapsulating Rubedo’s love for blending modern production with a traditional set of rock instruments. After a few hat taps, a snare blast sets the fuze, lighting the fire that burns through the albums ten meaty tracks. This hapless dancing between old and new school reminds me of some of my favorite alternative groups of the late 2000’s and like Band of Horses, and Colorado Natives and BandWagon besties In The Whale, blending the vocal and lyrical content of Arcade fire with the vast musical atmospheres of Explosions In The Sky. While filled predominantly by traditional rock instrumentation, the gaps in the track are filled with the a smattering of electronic bits and bobs, like the squealing synth that leads us into “Whom You Fear,” or the whispering synths that accompany the bluesy romp of “Ain’t it Funny.” Some songs take a heavier helping of digitization, like “Who,” which saunters, dead eyed, down a sad future’s alley. While it’s unfeeling metronymic beat does give the record some depth of content, my favor lies with their more traditionally rock charged tracks, using the electric production to punch up rousing melodies and bossy beats.

With an album title so blaringly positive, you wouldn’t be crazy to assume content that follows suit. Luckily, the tunes that follow are complex and nuanced, emotionally and musically. “Psychic Tune” is a warped and mind bending tune, blending the acoustic weirdness of Cat Power with eerie multilayered vocals, giving the entire track an ethereal, quasi-corporeal glint. If “Psychic Tune” is one end of the spectrum, “Law of Attraction” may be the other. Heralding the doctrine of happiness, the track goes through many different stages, at first a head bobbing Blues jam, then a break-your-neck break down, followed by a rustling, whirling refrain, which boils back up towards the original riff. While I’ve never had the pleasure of seeing the group live, the track betrays an inner jam band, trailing out to a little over eight minutes. The album’s closer “It’s All Fine” goes almost two minutes longer, without losing an ounce of finesse or intensity, qualities paramount to the kind of supercharged tunes Rubedo bangs out.
An insight into the writer’s process: If I can help it, I try to listen to an album from a new artist knowing as little as possible about them before I do. The fewer assumptions I put on the album, the better. When I stumbled onto this record, via a friend’s recommendation, I didn’t need a press release (or the album name) to feel the love radiating from its uproarious choruses and battering bridges. Love Is The Answer is equal parts battering, challenging, and fun as hell. You can catch these Denver locals in their hometown on a semi-regular basis, including a New Year’s Eve show at the Bluebird Theater.