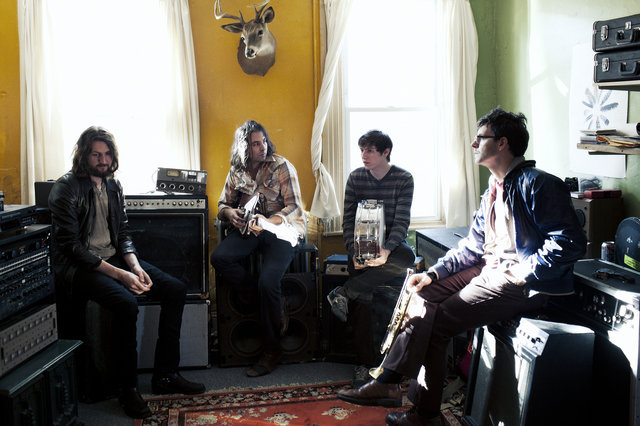 The most obvious observation about The War On Drugs is they sound like old Bruce Springsteen or Bob Dylan. However, lead singer and founding member Adam Granduciel would rather have you focus on their progression as a band. Formed in Philadelphia in 2005 with fellow artist Kurt Vile, The War On Drugs put out their first album, Wagonwheel Blues, in 2008. After a few lineup changes, they released their most recent album, Lost in the Dream, in 2014. Despite its name, The War on Drugs, in fact, does not have a war on drugs.

“The name of the band, in retrospect, reflects a time in my life when we were living out in Oakland, California being crazy and writing all this crazy poetry,” Granduciel reveals. “That’s how the name came up. The name itself doesn’t have any personal implications, but I guess the only thing is, over time, when I get asked that question, I think about it more than I ever did. The only thing is that the actual war on drugs is kind of an embarrassing thing. We don’t really do it in any other country. We’re an American band so I guess that makes sense. Nothing personal though really.”

Vile left in 2009 to focus more on his solo career and Granduciel forged ahead on his own path. He carved out the ideal band to accompany him on his latest tour in support of Lost in the Dream.

“Kurt and I still keep in touch,” he says. “We’ve both been so busy so we don’t see each other in the same way we used to, but we are still friends and he’s still the funniest dude I’ve ever met in my life. When he was in the band, he already had a solo career. He wasn’t really interested in being in this band. I knew that anyway. I knew he wasn’t going to start touring the world with The War On Drugs. I knew this band wasn’t his main priority, which was fine.”

2011’s Slave Ambient featured a few contributions from Vile, but was overall a Granduciel project. It was the first to feature drummer Steve Urgo and last for drummer Mike Zanghi. Preceded by 2010’s Future Weather EP, the album offered more classic rock influences and was something Granduciel was very proud of making despite the pressure to make it great.

“After Wagonwheel Blues, I think we had a small, but passionate fan base made of a bunch of people who really liked our music,” he says. “I was really excited to make a new record because we spent a lot of time on it. You might feel like you have to succumb to the machine a little bit more and release something within a year to keep it rolling, but at the end of the day, do you really have to? At the end of the day, it’s really not my problem.”

On Lost in the Dream, the first noticeable difference between past efforts is the amount of instrumental moments throughout the album. Tracks like “Disappearing” and “An Ocean Between Waves,” seem to linger longer than previous The War On Drugs songs. Ironically, when Granduciel sings, the Springsteen can’t help but come out of him.

“I definitely hear it,” he admits. “I got into Dylan heavily when I was like 20; Springsteen maybe a little later, like 23 or something. That’s where I’m coming from with my stuff. Their catalogs have been really important to me. I am trying to follow in their footsteps and carve my own place in history.”

For Granduciel and the rest of the band, it was a grueling year long recording process, but it paid off. Lost in the Dream is an honest (sometimes painfully so) account of the dissolution of his long-term relationship and inescapable self-doubt delivered in the most beautiful way. While this is clearly a new chapter for him, the pages written so far seem to be a story of triumph. In fact, they just signed a deal with Atlantic Records in June 2015.

“It’s more of a professional operation now,” he jokes. “We have it down a little more. It’s like watching a real band play [laughs]. These are songs I really care about put together with people I care about. I just hope to keep doing it and make albums I like making. I’m not trying to get too comfortable. I want to make cool music and feel that I’m getting better at what I do. I’ve gravitated towards some of my favorite artists later in their career. I just want to keep doing my thing and hopefully people keep listening. Being a musician gets a little lonely sometimes, but I don’t miss casual Fridays or anything. Fuck that.”

The War On Drugs with Galactic and Givers, August 7, at Fox Theatre, Boulder, 8:30 p.m. Tickets are $49.50. Visit www.foxtheatre.com for more information.