In Oakland, California, if you mention the name Zion I, most likely people know who you’re talking about. Go further inland and there’s less of a chance people have ever heard of them. However, emcee Zumbi and producer Amp Live are on a mission to change that. They’ve come a long way since their 1997 debut, subsequently spitting out albums on a regular basis for over 15 years. With Amp Live’s futuristic production and Zumbi’s introspective, often metaphysical lyrical content, Zion I stands out amongst the contemporary rappers of today. Zumbi is more likely to rap about yoga before he raps about “da club.” As we continue to sail through the worst economy the world has seen in decades, it’s ironic that mainstream rappers brag about how much money they have, something Zumbi approaches with common sense.

“I feel that people react to pressure in different ways,” he says. “Some are eager to confront the problem while others would rather dream themselves away and slowly self-destruct. This is basically how I look at lyricism in this day and age. Our society is largely escapist, so it only follows the commercial artists that reflect this. I enjoy the more playful approach to content though. I can listen to anyone as long as there is truth in his or her vocals. I get lost when cats talk nonsense simply to sell records. A lot of artists are sheep out there. I feel like this idea of super materialism like, ‘I got ice, I got all this and that,’ is ridiculous. We’re in a recession. This is the worst economic situation of our lives. Hip-hop comes from a place of struggle. It was the early cats’ only voice. The music industry looks at it solely as a way of making money instead of an artistic form of human expression.”

Starting with 2000’s critically acclaimed Mind Over Matter, Zumbi’s message has remained unwavering. “Be creative and alive,” he says. “This life is precious and we are all here for a reason. Find that reason and become eternal.” While that may sound a little too “new age” for some people, Zion I’s fans internalize the message and their audiences are often seen singing along to every word, as if it’s some type of religion.

Mind Over Matter includes songs such as “Inner Light,” “Elevation” and “Creation,” words which beautifully illustrate the way he thinks. The fact that the album did so well was a pleasant, if not surprising, by-product.

“Mind Over Matter was an exercise in purity,” he says. “It was the time of life we were in. All we wanted was to be able to make music. All of our free time was spent in the studio. We also took about three years to make that record. It ended up being all of the best songs from all that time being the lab. We were idealistic and so passionate. I feel like it shows in the music itself.”

Aside from Zumbi’s mostly conscious lyrics (he does have a few party anthems, for lack of a better phrase), Amp Live’s beats hit hard. On 2009’s The Takeover, for example, the track “Juicy Juice” is bass-heavy and clearly made for large speakers. Amp Live has been making beats for almost two decades, and in addition to being one half of Zion I, he’s also contributed his talent to Planet Asia, Too Short and Chali 2na of Jurassic 5. The amount of production tools he has in his arsenal is vast.

“Right now I’m working with a lot of custom midi controllers with joysticks and crazy buttons to trigger,” Amp Live says. “Abelton keeps me inspired. I’m having a lot of fun in the studio these days.”

That’s clear. On Zion I’s 2012’s effort, Shadowboxing, Amp Live brings the up-tempo, electronic-fused production while, true to form,  Zumbi makes you feel better than you did before putting on the album. While the formula is somewhat abandoned on the album, the duo is still experimenting with its style while trying to find its groove. While Zion I hasn’t put out a full-length since then, they have released several free EPs and will drop a new live album, Live from Oaklandia, in February.

That positivity is earning them slews of accolades and adoration from their fans. Zumbi has learned a lot throughout the process. 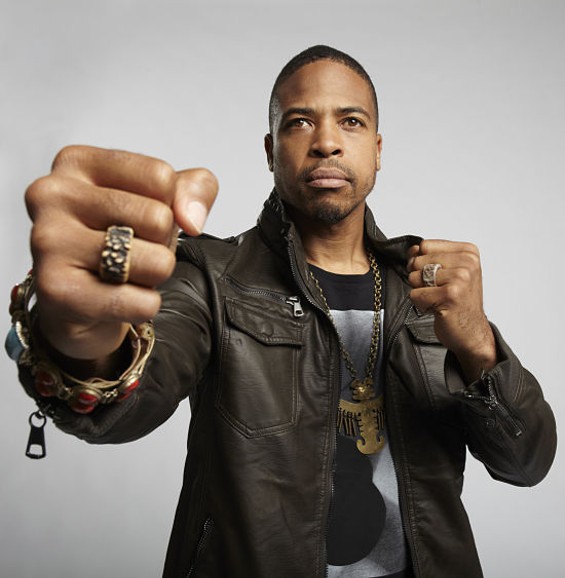 “I have a good family,” he says. “They always encouraged me to eat healthy and take care of myself. I took that starting block and added a bunch to it. When I was in high school, I was the dude that after we went to a club or a party and we’d stop at 7-11, I’d be the cat with the Power Bar [laughs]. Everybody else was getting chips, hot dogs and candy bars. I learned to eat healthy and it makes me feel better about who I am and feel better physically, as well.”

Zumbi and Amp Live are able to harness that energy into brilliance when performing on stage. Their music elevate the pulse once the pair works up a sweat and get the crowd involved. Above all, you’ll feel the love.

“Everything is different these days, because music is virtually free. The music feels like more of an offering than it used to; it’s about showing your fans that you appreciate them,” Zumbi concludes. “In turn, they’ll support you back in whatever way they can. You give it away without wanting or needing anything. The love returns on its own.”