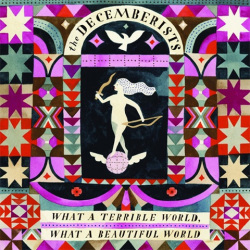 We know you built your life around us

Would we change, we had to change some”

Beginning in 2000, The Decemberists used organ and accordion to give a minstrel tinge to their work. In 2011, with their sixth album The King is Dead, the team took a turn to a kinder sound. This new content gave lead songwriter Colin Meloy a chance to step out of his lyrical box, which in Meloy’s case, happens to be a coffin. The content was almost hymnal.

A few weeks ago in our New Music Monday column, I said that the debut singles from The Decemberists’ new album suggested we might be seeing another warm, kind, folksy album. While What a Terrible World, What a Beautiful World may sound at first to be just that, it is far away the toothiest album to The Decemberists’ name.

The opening track is quite literally a message to the audience. In a moment of Death Grips like defiance, the band takes a moment to vent new frustrations found with fame. It seems that The Decemberists sit uncomfortably with the following they gained in recent years. The irony here is that what follows is an album that covers a breadth of content, including that which the aforementioned fans have so desperately pleaded for; from the dank and macabre we’ve come to know from the group, to the softer stylings of The King is Dead, the band’s previous album.

Meloy’s poetry has been sorely missed, and it has lost none of its potency. The album’s biggest boon comes in its musical exploration, specifically in the guitar. “Till The Water’s All Long Gone” and “Carolina Low” each have the bluesiest sounds we’ve heard from the group, all of which appears in Meloy’s acoustic guitar work. Fingerpicking and note bending give the songs a valley folkloric feel. With a bright, brassy reverb, “Easy Come, Easy Go” feels more like a track from Link Wray.

Many of the tracks have both styles. “Anti-Summersong” is the best example of this juxtaposition. With a backbone of rich guitars, and a lead fiddle, the track sings with a folky charm. As if the title weren’t clear enough, the lyrics speak to frustration with limiting fans; “I’m not going on / Just to sing another summer song,” and later, when the lyric becomes “I’m not going on / Just to sing

another suicide singalong song,” it becomes clear they’re not only frustrated with The King is Dead fans, but of their earlier, darker work as well.

The album is quintessential Decemberists. Its not grand, bold progress that make the album special, but inumberal small challenges throughout. Melody once again leads his band of minstrels into the fray once more, to miraculous result. The Decemberists will going coming to Red Rocks in May with Spoon, also promoting a new album.