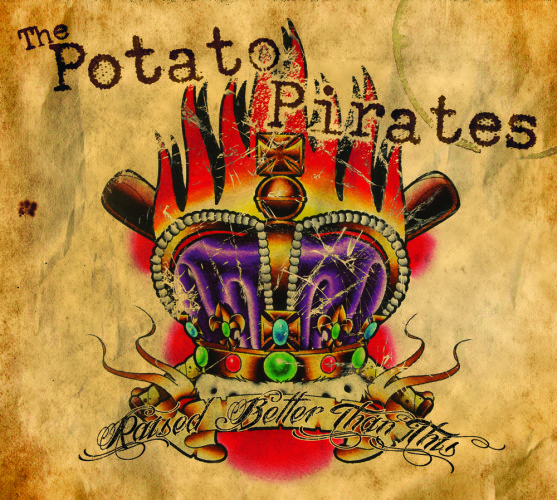 Just as diverse as the big city itself, Denver punk band The Potato Pirates’ new album has something for everyone. Raised Better Than This came out on October 7, 2014 after a much anticipated wait by local fans and the band. This quintet is usually known for being a Mile High punk band with occasional ska influences and the curveball bagpipe player. They have come a long way since their first self-titled album released in 2008. The twelve songs on their new album include several different influences that make this collection as incredible as the first two albums were.

One of the songs with noticeable ska influences like the fast tempo and upstrokes on the guitar is “Tequila Romance.” This song features lyrics that apply to the struggles in relationships and the bitter sweet indulgence of drinking. It usually ends badly but you keep coming back for more. On the subject of alcohol, “Thinkin’ About Drinkin’” has a catchy chorus. This song is sure to be a crowd favorite because of the repetition and easy to sing along style of the chorus. Two songs that are on Raised Better Than This and also featured on the Williams Street EP in 2012 are “Can’t Go Back” and “Gullible.” “Can’t Go Back” is more of a Hardcore Punk song but hardly compares to the last song on the new album, “Struggle.” This song sounds more Hardcore than all of their other songs with it’s screaming vocals and being faster, heavier and more abrasive. Do you need a Bagpipe fix? Take a listen to “Boots for Brains.”

Denver is lucky to be the home to this band that plays shows throughout the local venues such as the DIY venue Seventh Circle Music Collective as well as going on tour regularly. Their next show is at the Gothic Theatre on February 28th with Screeching Weasel, The Dwarves, and The Queers.