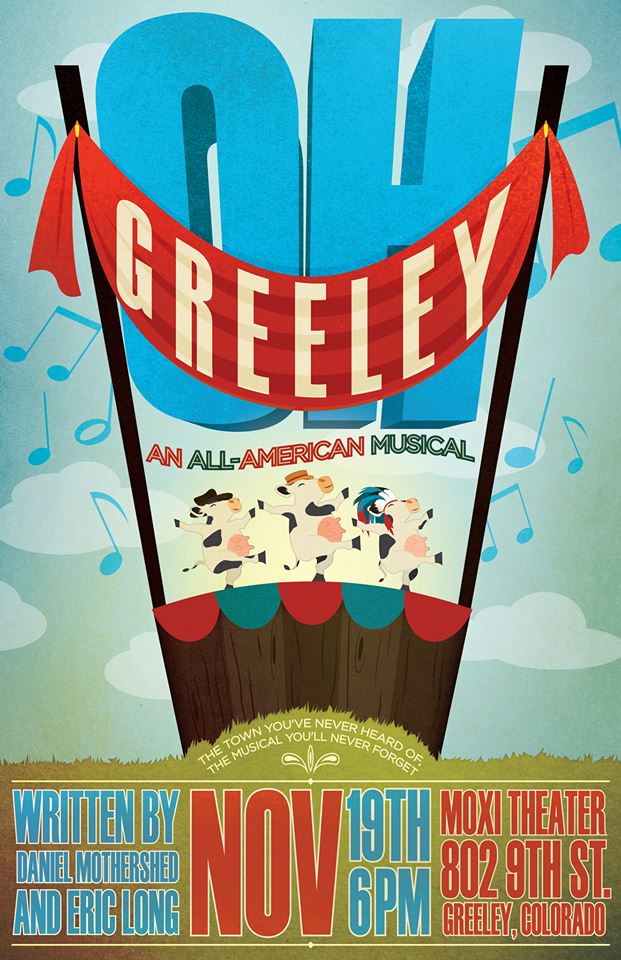 When asked how he got into theater, 25-year-old Greeley native Daniel Mothershed said he didn’t know.

“I sort of tripped into doing theater in high school,” he said. “I performed a little bit, but it was kind of on my own.”

Mothershed has put on theater productions in Greeley, mostly at the Atlas Theater on 16th Street for the last few years under the title of Cheaply Intellectual Theater, a platform for skewering (and informing the audience about) topics such as The Bible, American History and Classic Literature. On November 19, Mothershed and his production partners, Shane White and Eric Long, took over The Moxi and put on their most ambitious show yet, Oh Greeley: An All American Musical.

Mothershed said that Oh Greeley has the essence of the Cheaply Intellectual productions.

“The idea that, at its heart, it is people walking out on stage and telling jokes, and being a little informative,” he said. “It’s got that, but it’s a little bigger and, I would say, a lot less cheap. It’s cost us about a thousand some dollars… where as all the Cheaply Intellectual shows, I think the most we ever spent on any show was, I think, $80.”

The original idea for Oh Greeley, which covers the general history of Greeley in a sarcastic/sincere manner, came from Long, who brought the concept to Mothershed two years ago because he wanted to do something for Prohibition Day.

“He was just talking about how there’s a lot of Greeley history things that people don’t know and haven’t heard of,” he said. “Some are ridiculous and funny, and some are actually just genuinely interesting. Somewhere in between that we came up with the idea for the show, and I don’t actually remember. I was on the radio about it the other day and the guy asked me that, I was like, ‘I don’t remember.’ None of us remember, [Long] doesn’t remember. It’s kind of this weird grey area.

“The tagline [Shane White] created for it with was ‘The town you’ve never heard of, the musical you’ll never forget.’ Which is wonderful.”

“I think there are only two songs in it,” Mothershed continued, “and as we talked about how to cover some things in history, we said ‘there should be more songs.’ We have a song about- like an Andrew Sisters-style 1930s song about Greeley having Prisoner Of War camps. Gradually, more and more songs showed up, and we were like, ‘Oh, this is a musical, so we got to do it like a musical.’ I’ve done a lot of shows that have had three to four people in them. We got to have more people to sing songs. We can’t rely on my less-than-good musical skills.”

The end result was a hilariously informative musical bringing in the likes of Horace Greeley, Nathan Meeker, Warren Monfort, Rattlesnake Kate and A.F. Ray, interlaced with comments on the stench of Greeley. Long portrayed the Garden City boozeman as well as the town’s namesake, while Mothershed played the roles of Meeker and Monfort.

One of Mothershed’s early formative moments was working on a production Fiddler on the Roof. Which, when the live band pulled out of the production, became a production of Alice in Wonderland.

“It’s literally the world’s worst production of Alice in Wonderland that’s ever been produced,” he recalled. “And I still bump into people who saw it and I always feel like I owe them $7.50. And then… I hate when people say, ‘and then I was hooked.’ But, I really enjoyed it and got out of high school, and didn’t go to UNC, didn’t go to college, didn’t do anything. So it was my friends and I going, ‘we love performing, but we’re probably not going to get into a lot of shows, so I guess we’ll have to write our own.’ I would much rather just perform and act, but the writing has sort of cropped as a necessity, and fortunately I seemed to be not terrible at it.” 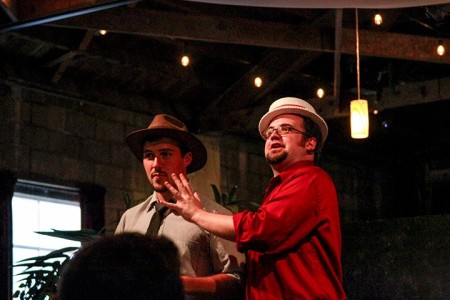 Mothershed said he’s known White for 15 years, having met him in Junior high and even working with him on the doomed Alice in Wonderland project. The pair also worked together on a web series a couple years ago. Long, who works for Frontier Academy, said he knew of Mothershed through his wife, who was his teacher.

“Daniel was a student of my wife’s she directed a musical he was in,” Long said via email. “Daniel is a sweet guy with a sarcastic attitude.”

Mothershed would ask Long to play small roles in his productions. He said that working with Mothershed could be “a little difficult at times, but Daniel is a talented writer so most of the difficulties are easily forgiven. I would love to see Daniel step out and do more projects in a more official capacity. He should be writing commercials for local business and writing columns, doing news, maybe even radio!”

As of right now, Mothershed doesn’t know what his next production is. One of the founding members of Cheaply Intellectual Theater got married and moved to Seattle, while White and Mothershed are kicking around ideas for future shows, such as The History of Theater or putting on the Classic Literature Show again.