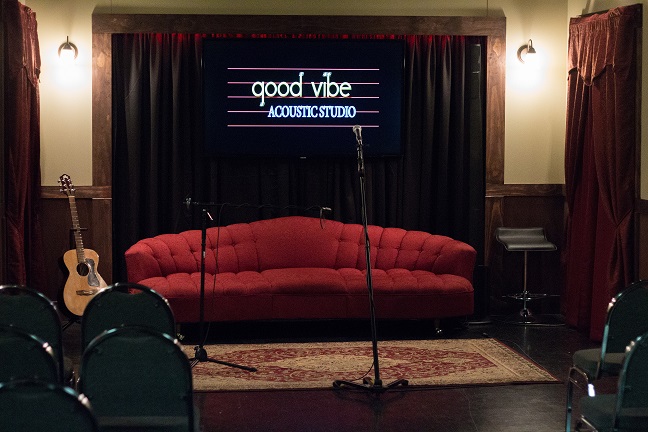 On Saturday, September 6, Ren Merry, Lindsay Davis and Daniel Bisceglia gathered before an audience in a small studio on 8th Avenue for their first group performance. Merry is a classical guitarist and a teacher at Frontier Academy who’s been playing for 35 years. Bisceglia, also a teacher from Frontier, has only been playing for 15 years, while Davis, a yoga teacher and violinist, has been playing her instrument for 20 years.

“I’ve performed before, generally classical or in church,” Davis said. “So this is kind of a first. I’ve fiddled before, but just usually for family, so this has been a first to branch out and do some improvisation.”

The trio wasn’t just performing for the audience in the room though. Good Vibe Acoustic Studio, while a performance venue, specializes in live web broadcasts and videos for performers. The studio had it’s grand opening on July 26, and like the September 6 trio’s performance, the grand opening’s performers were playing to an online audience.

“We had an audience in house,” said Patrick Callan, owner of Good Vibe, “and since we were broadcasting to the web… we only had about 14 people in the audience during the grand opening, a little disappointing for me, but we had 79 discreet viewers online. And the audience that we have online is worldwide. So people in Australia were commenting as the show was going on, people from England, people from all over the US were watching it.”

Callan’s goal with Good Vibe is to provide a high quality recording for those artists who perform, and do it in front of a live audience.

“There’s so many musicians out there, they have really poor quality videos of themselves on YouTube or their Facebook pages,” he said. “Usually it’s somebody with their iPhone in the audience who’s trying to record, so the quality’s bad. You can hear the person who’s recording talking and there’s always a lot of chatter around.”

Callan said he had been looking around for studio space since last October. Furthermore, it wasn’t my intent to set up a recording studio, but to set up a small music venue.

“I started out looking at coffee shops and a bunch of different spaces when I was looking for space to rent,” he said. “Coffee shops were not really in line with what I wanted to do anyway because in coffee shops, coffee is the primary goal in the coffee shop. My intent is it’s all about the music, so it was tough to find a space that would be small, affordable for me and be all about the music as opposed to running a small bar or a coffee shop. Because there’s so many different places that offer live music, but that’s not their primary objective, and for me it’s always been about the music.”

The space Callan ended up coming across is a shared studio space, the building split in two halves with a studio side and a gallery side. Among Callan’s neighbors are painter Kim A. Snyder, photographer Jill Bailey of Flare of Art, and videographer and building owner Andy Nagel of Mirage Productions, Inc.

“[Nagel]’s been in the video industry for quite a while,” Callan said. “He and I got to talking last December about the opportunity to share the studio space, which lead me to develop the idea of putting together a studio for audio and video recording.”

Good Vibe Acoustic Studio is a rather small place, its main set styled to look like a 1930s music parlor, with a small red couch surrounded by drapes within “doorways.” The whole area is 850 square feet. Callan said he only has seating for about 30 people comfortably.

“If it gets busier, I can bring in more chairs or make it standing room,” he said. “The intent is to make it as comfortable as possible for both the budding performer who’s nervous in front of an audience, or the singer-songwriter who’s experience but has poor quality recordings and would like to get some higher quality stuff.”

“It’s so much more than the video on YouTube for the local performer,” Callan said. “It actually gives them a global audience and that’s never a bad thing.”