Self-described brass house trio Too Many Zooz has only been around since late last year, and rose to national prominence sometime in January when someone posted a video of the group performing in Union Square. Fans have said that the first time hearing the group was when they were walking through the area and “suddenly heard this massive, incredible sound.” That’s about accurate.

According to trumpeter Matt Doe, Too Many Zooz is a spinoff band of sorts that began as a six-piece performance called Drumadics, where Matt’s school friend Leo (here on the saxophone) was in the band with percussionist The King of Sludge. Matt joined them one day, and the resulting sound was eventually worked into Too Many Zooz.

Their music features huge sound for being only three guys, delivering enough complexity to match up to a group twice their size, and that alone is admirable. Watching them perform is half of the fun, however. From Matt’s incredible trumpet solos to The King of Sludge’s airtight percussion and Leo’s propensity to shuffle and dance around while maintaining perfect rhythm on his sax, this is one of those groups whose stage presence is as much a part of the music as the instruments are. 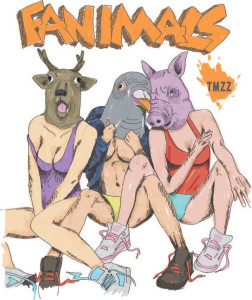 One of TMZZ’s strengths is how they start from small, simple pieces and build into something huge and ridiculous, usually dragged upwards with rising tones until all three pieces explode into call-and-response harmony and dueling solos. There’s less of that here than on debut F Note but this is still unmistakably a Too Many Zooz album with a freshly organic feel, right down to the album art courtesy of Leo’s brother.

With track titles such as “Mouse Trap” and “Turtledactyl,” TMZZ mostly retains the weird, vaguely unsettling animal theme for their music, but it works. The former sounds remarkably like a mouse getting caught. The latter starts out as weird as its title before settling into an extremely satisfying groove.

Fanimals is daring in that TMZZ refuses to replicate F Note. That debut album was solid, and this one is too; it is, however, a very different album and fans of the group will prefer one over the other for different reasons. Fanimals introduces a slightly cleaner sound for the trio: while F Note was wild and experimental to the point where the casual listener might label it as sloppy, Fanimals makes things a bit neater. While that means fewer wild solos, it also means that Fanimals feels more like an actual album than F Note’s 16 minute jam session. Both are extremely strong bodies of work and very much worth listening to, though it’s worth noting that nothing here quite lives up to the incredible one-two punch of “To the Top” and “F.W.S.” that we first saw in that video back in January. They get damn closer, however, with closing duo “House of the Glass Red, Pts I & II,” which finds the guys melding the cleaner sound of this new release with the wild unpredictability of F Note.

Really, the bottom line is that Too Many Zooz is absolutely worth a look. These brass-based groups are too rare, and this trio from New York scratches an itch for something different and silly. This is already the second release in one year, and TMZZ’s Matt Doe says that the band does have plans to come to Colorado at some point along with a tour of the West Coast. As good as the albums are, the live performances are really something incredible, so be sure to catch them when they pass through. To tide you over, both albums are available on Bandcamp.