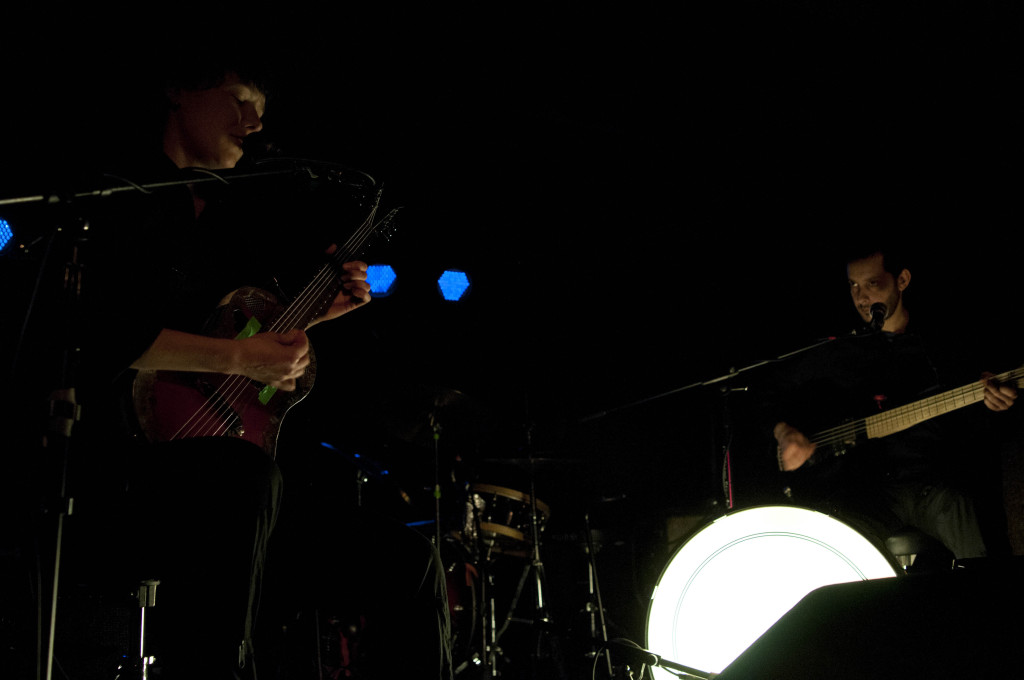 The Larimer Lounge was perfect dark and intimate venue to house Buke & Gase on February 11th. Arone Dyer and Aron Sanchez came to the Denver venue armed with their signature handmade instruments and an impressive, yet modest set of pedals. Ahleuchatistas opened for the duo, and did an excellent job of preparing the audience with an appropriately eccentric mood and a hand-crafted sound.

The audience, (a sea of piercings and Pabst Blue Ribbons,) welcomed Buke & Gase to the stage with eager applause. Dyer and Sanchez were both dressed in black jumpsuits, and the stage was set up with minimal lighting, providing for an even more intimate experience. 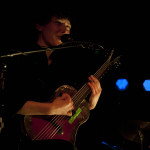 Buke & Gase opened on a high note with the first song on their new album General Dome, “Houdini Crush.” Right off the bat, everyone in the room seemed to have excited energy as they enjoyed Dyer and Sanchez show off their skill with their instruments. The first few songs Buke & Gase played were in the exact order that they appear on the album, and then they began to switch it up by throwing in songs from their first album Riposte, and their EP Function Falls.

The audience was huddled around the stage, moving to the driving gase riffs, and the beat of Dyer’s “toebourine.” Dyer was also able to sing perfectly on pitch even on difficult minor notes, all while maintaining her instruments and foot pedals. Sanchez seemed focused on Dyer, occasionally watching her pace, and ensuring a consistent pace. Halfway through the show, a light appeared from the inside of Sanchez’ bass drum and illuminated the stage. It was a simple, but nice touch and it only accentuated the powerfully raw vibe within the Larimer Lounge. The songs “Hard Times” and “Medulla Oblongata” stood out in particular, and the audience could appreciate the emotion behind the music. 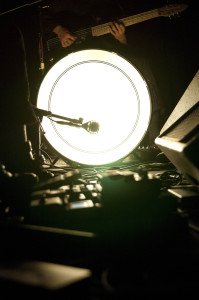 It is easy to become boring in smaller settings, but Buke & Gase kept the audience captivated. This is a show that should have been scheduled on the weekend instead of being on a Monday night so that more people might have been able to appreciate the talent of the growing band. Buke & Gase finished their set and the audience shouted their pleas for an encore. The band finished with another three songs, and were joined by the guys from Ahleuchatistas to end the show on another incredible high. Buke & Gase is currently touring internationally, and sharing their unique sound with live audiences through out Western Europe and Australia. If any chance to see Buke & Gase live arises, everyone who is passionate about music should definitely take the opportunity.