Greg Holden’s music has always been incredibly timely and inspired. Rallying the emotions of a global fan base, the British born singer-songwriter’s tunes might be more familiar to you than you think.

His first hit “The Lost Boy” took him from his NYC acoustic gigs to the international stage in 2012. “‘The Lost Boy’ did awesome and raised all this money for the Red Cross in Europe.” Holden says. “I was pumped because I’d written this song that meant the world to me. Then it ended up raising money for the thing I wrote the song about in the first place. That was incredibly validating for me. It gave me hope that I could continue to do that. I didn’t have to write that sell-out song that everybody’s chasing. I could probably could be a lot more successful if I sucked it up and wrote pop hits, but I don’t feel good about doing that. I have the resources for that, but I don’t feel inspired about working in that genre.

A few years later a co-writing session produced the song “Home” which became a hit for American Idol winner Phillip Phillips and later the theme song for the 2014 winter Olympics (see his version of the song via a KBCO performance HERE) but the songs of passion and purpose permeate his cause as a songwriter. 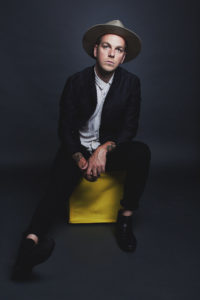 The next hit under his name “Boys In The Street” serendipitously released it’s viral video on the day gay marriage became legal in the US, becoming an anthem for equal rights in 2015. “Hold On Tight,” yet another single from that year features a video illustrating the interconnectedness of our world and the importance of doing the right thing to help those in need.

Now living in LA and having been dropped from his Warner Brothers deal, he admits missing the NYC grind and being challenged to work in new ways. Holden’s brand new single “Power Shift” stays congruent with the themes of passionate justice his fans have come to associate with Holden’s work. He attributes his inspiration to his way of life as an informed citizen.

“Half of it boils down to the fact that I’m writing about current events. The way I’ve written has always changed and it really is just whatever has been swirling around in my head. I don’t sit down and say ‘I’m gonna write a song about a Sudanese refugee now’ – I just wait for it to hit me. I read the New Yorker every day and unfortunately stay informed about what’s going on. I wish I could stick my head in the sand because I’d probably feel a whole lot better. I’m one of those people who doesn’t feel good ignoring what’s going on. It feels irresponsible.

“It’s always been easier for me to write about stuff like that – I love being in love, but I’ve never been one to sit down and write love songs. I’ve never felt that intense ‘oh my god I’m so in love that I can only write about that’ feeling – I’m from England you know!” He laughs, “I’ve always felt better writing about pain.”

Pain and passion aside, fans of his work will notice a sonic update in the “Power Shift” which Holden self-produced. “I made Power Shift by myself at home” he says, “building the track first and then putting the lyrics to it – which I never used to do. I used to always write lyrics first. Now I’m sort of producing as I go. It scares me, to be quite honest, but I needed the challenge to do this or I’d have lost all inspiration.”

He’s also just released “On The Run,” produced by Butch Walker, who’s big hit is, ironically, “Synthesizers” – a tune about NOT playing synths. “Synthesizers can be quite emotive,” Holden admits. “A lot of soundscape pads can be used very powerfully – to create a lot of emotion and tension in a song. And, I’m sick of playing music on an acoustic guitar. I could not sit down and write a song on an acoustic guitar right now – or a good one anyway – So now I sit down and build a soundscape on my computer and build some inspiration – build some climactic swells. I need that sort of thing to put me in a place where I can write.”

Holden is on tour with Butch Walker in support of the two singles, poised to release another in October via BMG. In a stroke of irony, his sets during the tour will be solo with acoustic guitar opening up for Walker’s full band, which, yes, includes synthesizers. Catch the show at The Bluebird Theater this Sunday, September 9th.