Cleto Cordero grew up in Lubbock, Texas, a dusty city in an area dominated by oil rigs and the badlands. Like most kids who live in a quiet hometown, Cordero believed there wasn’t much to do. But he looks back on that time with fondness: That’s how he grew into the eventual frontman and songwriter for Flatland Cavalry, a Country-Folk and Americana band on the verge of a breakout. The band plays on August 16 at the Moxi Theater.

“There isn’t much to look at,” Cordero said, “but I think that leads to you having a bit more imagination.”

That imagination came out in The Blue Light, a Lubbock bar where musicians gather on Mondays for songwriter night, a place where he could showcase new material in the hopes of grabbing some attention and, perhaps more importantly, entertaining his buddies. “A lot of songwriters get their start there,” Cordero said. “It’s a competition, but it’s a friendly one. You want to show them, ‘Hey, look at what I came up with.’” 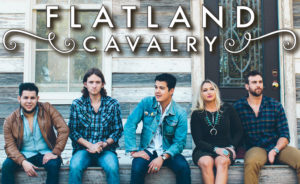 Cordero put together Flatland Cavalry through the music circles around Texas Tech University in Lubbock. He wanted a band with a fiddle player and a sound that harkened back to the older days of country, the days of George Strait, one of his favorites.

Cordero is hesitant to bash the so-called new country, the kind that originated in the 90’s and resembles pop music more than Johnny Cash. He doesn’t judge it, he said. But he doesn’t listen to it either.

“That stuff never caught my ear,” he said. “There’s just way more interesting things you can do than that.”

He likes folk, he said, and what others call “Americana” – there’s a lot more freedom in the structure of his songs which allows him to tell stories with the kind of creativity he cherishes.

“With these songs, you don’t have to have a chorus necessarily,” Cordero said. “You don’t have to fit a formula to play it on the radio. You’re just telling a story. It may not be pretty and polished, but the folks who listen to it are there for the message and not just the presentation.”

His songs stem from his real-life experiences, and some cover the same subjects pop music does, from breakups to falling in love, but they’re said in a way that hurts, such as dreaming with a girl about “A Life Where We Work Out.” The song’s bittersweet foundation suggests that, for whatever reason, it’s impossible for those two to have that life.

The band’s new album will be out soon — he was headed into the studio for two weeks to record it during a phone interview — and Cordero believes the new songs are more about life and less about his own take on it.

“They still play off human emotion, but we’re all human beings and we all have our ups and downs,” he said. “If I can get the music to add to the message I’m sending, that’s one of my favorite things to do.”

He worries about the popularity of folk music today, thanks to bands such as The Lumineers (“Hey, Ho”) and others who have hit it big and made it more mainstream – perhaps almost as mainstream as pop country music. But he’s encouraged by the fact that folk’s been around since the 1800s (or even earlier) and that the new wave of bands who could be grouped together don’t seem to be churning out hits like a Nashville-style factory.

“It could become homogenized – into maybe what people consider country music today,” he said. “But then someone else will branch off and make it different again.”