Denver indie-pop group Wildermiss combine rhythmic, harmonic tension with the chart-tested power of hook repetition. Though first looks at synth-wielding front-woman Emma Cole may conjure pop stereotypes, look deeper. Wildermiss are a guitar band in the truest sense; evidenced by their debut EP Lost With You and their engaging live shows.

The quartet won both 93.3 KTCL’s band battles “The Big Gig” and “Hometown For The Holidays” in 2017. Proving that their mix of ingenue synth-pop and garage guitar make them what they are above all else: likeable.

Bandwagon: You’re from Colorado, Arizona and Texas respectively, what are your individual musical backgrounds?

Emma (Tucson, AZ) –  I grew up playing the piano by ear and singing. I was always involved in music. Choirs, musicals, songwriting, competitions. Music 4 lyfe. Ya know?

Josh (Angleton, TX) –  I grew up playing guitar in my dad’s church. The first band I played in was a screamo band called markovermyheart. We only played one show but that’s all it took for me to know that’s what I wanted to do the rest of my life.

Caleb Thoemke (Portland, OR) – I have been drumming in church since I was 8 and went to the University of Colorado at Denver for Recording Arts.

Seth (guitar – Thornton, CO) – I was introduced to music at a very young age, starting violin at 4. From there I’ve had a wide background in different ensembles and genres of music through school. Being a multi-instrumentalist I finally landed on guitar with Wildermiss!

BW: You’ve been Denver friends for four years. How did Wildermiss happen?

WM: A few months after Red Fox Run (Josh, Seth and Caleb’s former project) disbanded, Emma had her senior recital at CU Denver and asked her friends to perform with her. It was an amazing experience – like a Denver Music Scene supergroup; members of Red Fox Run, Evinair, Overslept, and Avenhart all performed together. We quickly realized that we came across something unique. One thing led to the next and we created Wildermiss.

BW: We wrote that the EP has “full-on indie-guitar, rim-click drive” and a “waterfall of guitar scales” behind Emma’s floating, feminine vocal in “Between Two Rooms,” and “Keep It Simple”s “ooh ooh hoot are like a coffee-house singer’s song turned indie dance-floor holler.” That instrument / vocal tension make it seem like a real group effort. Was it?

WM: Our writing process is 100% collaborative. Typically someone shows up with a skeleton of a song or an idea and we all add to and restructure it as a collective. We also demo everything. Our rehearsals are set up so we can multitrack-record songs as we’re writing them and immediately listen back and start revising. Since we had been playing these songs live for a bit, we had a pretty clear vision going into this EP. Joe Richmond (Churchill, The Fray, Tennis) produced the record in his personal studio over a couple months. It’s a glimpse of what we sound like now. 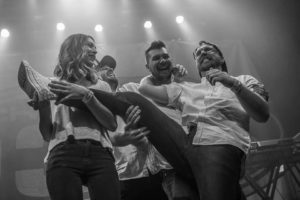 BW: Any songs surprise you during recording?

WM: “Tunnel Vision” was the most fun to see realized. It was one of the few songs that we allowed room for studio experimentation. We love the space in this song, and what we filled it with. But each song intentionally has their own distinct sounds and we hope to keep expanding. Our progression is not a straight line on a graph. It … is the graph?! Woah.

BW: What’s the best show you ever played?

WM: Our EP release show was freakin’ fun. We sold this show out 10 days in advance and were able to just focus on putting together the best show.

BW: What do you see Wildermiss doing at this time next year?

WM: Hopefully having a snowman building competition. But you know… global warming…

There’s no telling what exactly 2018 will hold for Wildermiss, though by the looks of their camaraderie and the sound of “Lost With You” we’re guessing big things. We look forward to checking in with the Wilder-snow-man-building-team in 350 days or so, but we’ll be sure to catch them on stage before then. Mark your calendar with a heart: January 11th with Pandas & People at The Bluebird Theater in Denver.