People tend to equate Flavor Flav with being the star of VH1’s now-defunct reality show Flavor Of Love. Every week, he’d floss his oversized clock while yelling his signature catchphrase, “Yeahhhhh boyyyeeee” at the top of his lungs. But there’s much more to the New York native. As a member of the legendary hip-hop group Public Enemy, he’s established himself as one of the best hype men in the music business. In fact, he essentially invented the role. Perhaps surprisingly to some, he’s also a self-taught musician who plays over a dozen instruments.

“Nobody taught me,” Flav says. “I taught myself. But I feel like that, you know, that was God teaching me.”

Flav’s wild journey started in 1959 when he was born in Roosevelt, New York. The now 58-year-old started playing piano at the age of five before moving on to drums and guitar. He met Public Enemy frontman Chuck D while attending Adelphi University and the two started collaborating on Chuck’s college radio show. The rest is history. Public Enemy has blossomed into one of the most influential hip-hop groups to ever rock a mic. Flav adopted the clock look early on and admits it began as a joke. 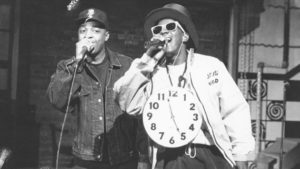 “We used to rock stopwatches around our necks as a fad,” he explains. “That was the style around that time. Somebody came to our projects one day with these boxes of clocks. One of my friends took the stop watch off my neck, put the clock around my neck, and everybody was laughing. You know, it started out as a joke. [Rapper] Son of Bazerk thought, you know, put the clock around my neck as a joke.

“Then they said, ‘We dare you to wear this clock on stage,’” he continues. “So, when we went to open up for The Beasties Boys in the state of New Jersey 1987, I wore the clock during the show. When we got the newspaper clippings back and we seen the pictures, the clock looked so dope. I said, ‘You know what? I’m gonna keep this look, I’m not gonna get rid of it’.’ And ever since then, I kept it. That’s how my clock came into existence.”

Son of Bazerk was also the name of a hip-hop group consisting of Son of Bazerk, Almighty Jahwell, Daddy Rawe and Half Pint, which was formed by Hank Shocklee, member of Public Enemy’s production crew, The Bomb Squad. When The Bomb Squad, Flav and Chuck got together, magic ensued and groundbreaking albums were made. Masterpieces like 1988’s It Takes A Nation Of Millions To Hold Us Back and 1990’s Fear Of A Black Planet cemented their place in hip-hop history. In fact, Public Enemy is one of the only rap groups inducted into The Rock and Roll Hall of Fame. 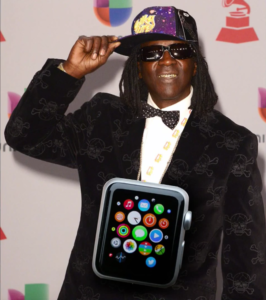 “I never envisioned that it would go this big, this far, you know what I’m saying?” he says. “My thing is I never really had the vision of all of this. My thing was just living day-to-day and just doing what I do best. And whatever came out of it, that’s what came out of it.

Although Public Enemy is currently on hiatus while Chuck tours with Prophets of Rage — his politically charged supergroup made of Cypress Hill’s B-Real, Rage Against The Machine’s Tom Morello, Brad Wilk and Tim Commerford, and Public Enemy’s DJ Lord — Flav is still busy working on his dream show, Flavor Flav’s Vegas. Since his VH1 show catapulted him to superstardom, he’s always been confident that his future would be in television.

“I was a little surprised by the success [of Flavor Of Love] but then again, I wasn’t surprised because I know who I am and I know how society accepts me,” he says. “So, it’s not like I expected it, but I had a feeling that I was gonna end up being big on television once I did hit television. I had a feeling.”