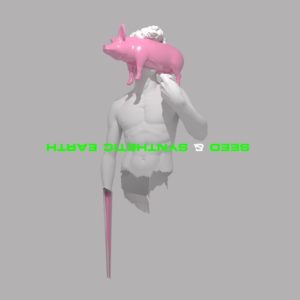 Vaporwave is probably one of the most niche music genres in existence, as well as the only one that the Internet could claim as its own. Mostly found on Bandcamp, Vaporwave is a nostalgia-tinged, remix-heavy genre of ambient electronic music that sets out to recreate mall music/elevator music of the 1980s and 1990s. Its name is a take-off of Vaporware, a tech industry term for hardware that never really existed outside of tech demo and trade shows. And the most prominent artist of Vaporwave is Vektroid.

Born Ramona Andra Xavier, the Portland, Oregon-based musician released in 2011 Floral Shoppe (Under the name Macintosh Plus) considered by many to be the album that popularized Vaporwave. Vektroid stopped releasing music regularly in 2013 – Floral Shoppe was one of nine albums she released in 2011 – so when she does release something, Vaporwave enthusiasts take note.

Vektroid’s latest release, Seed & Synthetic Earth, is unique because unlike Vektroid’s past work, it consists of more electronic musical composition instead of relying on sampled smooth jazz and synth music like most Vaporwave artists.

In comparison to her peers, Vektroid possesses a certain consistency, song-to-song and album-to-album, that other Vaporwave artists don’t normally have. This is usually because other VW artists use a wide array of samples in their work making every song sound tonally different. Vektroid in general limits her palette, such as using songs from a specific time period, artist or genre. While Seed & Synthetic Earth consists of more original compositions, she still limited herself to a couple choice beats, musical keys and tones, leading to that same consistency and making an album that sounds complete, and uniquely Vektroid’s work.

Vektroid has made an excellent electronic music album, perfect for listening to in a Toyota MR2 while blasting through tunnels late at night. Those interested in electronic music and ambient music, listen to Seed & Synthetic Earth. You will not regret it.