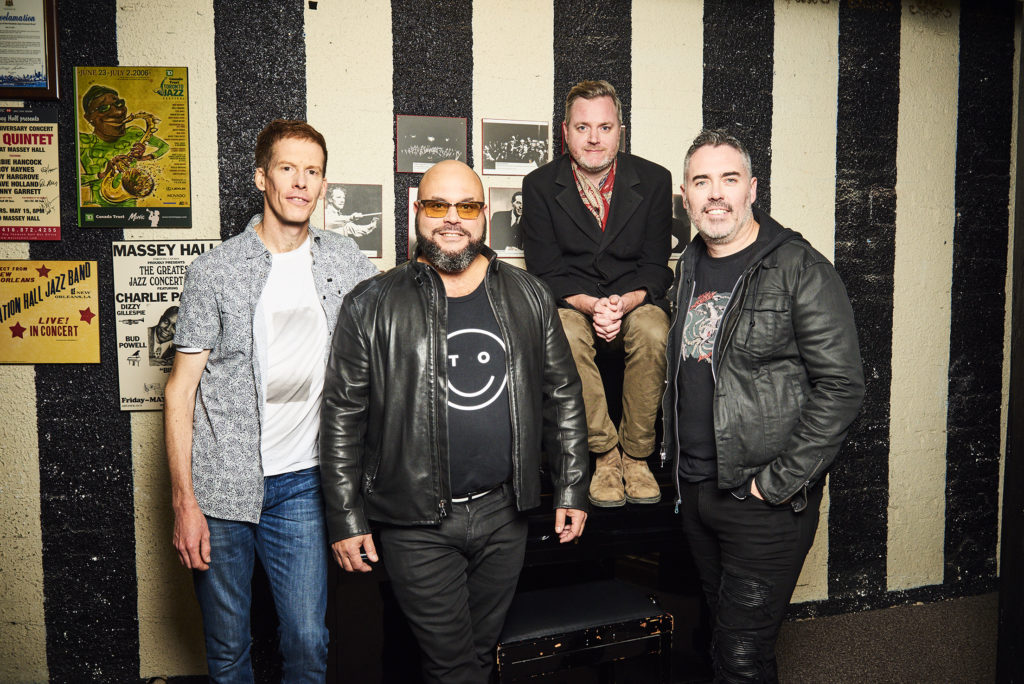 By now, most people have heard of the Barenaked Ladies — the ‘90s alternative band responsible for the Billboard Hot 100 hit “One Week” and songs like “If I Had $1000000.” Established in 1988 by Steven Page and Ed Robertson, the Canadian group never intentionally set out to use its band name as what eventually became a clever marketing tool. It just kind of…happened.

“That was never the intention,” Robertson says from his home in Toronto. “I had agreed to play a fundraiser for a local food bank. I had a high school band that won a local battle of the bands contest. A friend asked if I wanted to do this fundraiser, but I thought if I don’t start actually start handing in some papers and taking some tests, I’m not going to make it into university. So I stopped playing with the band I was playing with and totally forgot about the fundraiser.

“Eight months later, I had no band and I was called by the girl who I kind of had a bit of a crush on and she’s like, ‘You’re still on for the fundraiser, right? We’re really counting on you.’ I said, ‘Yes [pause]. Of course, I’m still on. But the name of the band has changed to…Barenaked Ladies!’ That’s the amount of thought that went into the band name. I called my friend Steve Page and said, ‘Hey we got a gig.’”

Robertson incorrectly assumed it would be his one and only show. In fact, for three months he thought every show would be his last, but 28 years later, the 46-year-old is still in a band called Barenaked Ladies. The pinball fanatic is adamant he wouldn’t change the name if he could go back in time.

“Our career has been littered with serendipitous good fortune,” he explains. “It’s been lots of hard work, but tons of luck and lots of interesting choices that led to who we are. The kind of whimsy of that flippant decision — that’s what we do every night. There’s spontaneity on stage. There’s a kind of tightrope walking on stage that sometimes fails spectacularly, but I love that we’re just going for it every night. To me, that’s what makes the show exciting.”

But it hasn’t always been smooth sailing. In 2009, Page decided to leave the band to pursue his own musical endeavors despite the early success of 1992’s Gordon and mainstream breakthrough of 1998’s Stunt. It left Robertson tasked with taking over lead vocal duties, which he confesses felt like a big responsibility, but something that forced him to really inhabit the role.

“It was a daunting transition to go through, and I think we may have been guilty of overthinking it a little too much and really freaking out,” he admits. “It was very liberating that the very first show we ever did as a four-piece was in front of 14,000 people at Universal Studios in Orlando. We freaked the fuck out about it. We rehearsed for weeks. We meticulously planned the entire set. We walked on stage and immediately realized nobody gave a shit [laughs]. Eighty-five percent of the crowd didn’t even know what the band looked like.”

Over the past decade, the talented guitarist/vocalist says he’s become 10 times the performer he used to be. His latest project, Ladies and Gentlemen: Barenaked Ladies and The Persuasions, was the result of an impromptu session with New York acapella group, The Persuasions. The album was released in April 2017.

“It’s basically a greatest hits and greatest misses compilation,” he explains. “We had no intention of making a record. We were going to record two or three songs, but before we knew it we had 15 songs done. We loved it so much that we had to release it. It was a pleasant surprise.”

While Barenaked Ladies have been nominated for a Grammy Award twice, they never won. In 1999, “One Week” was nominated for Best Pop Performance by a Duo or Group, but lost to The Brian Setzer Orchestra on a night they’ll never forget.

“I don’t like to call us two-time nominees — I like to call us two-time losers,” he jokes. “All that, ‘It’s just an honor to be nominated’ is bullshit. I wish I had a Grammy. We were sitting next to Semisonic when we lost to Brian Setzer. We made a deal with them that we would boo the shit out of whoever won and we did. As Setzer was walking up to the stage, all of Semisonic and all of Barenaked Ladies were yelling, ‘This is fucking bullshit.’ It was so much fun [laughs].”

The highlight of his career? Nearly three decades later, he’s still passionate about the music.

“I still look forward to playing with the guys,” he says. “To me, that is bigger than any accolade, award, single or whatever. The fact that 28 years in I actually really like my job and am grateful to be a touring musician is the best part. I still love it.”