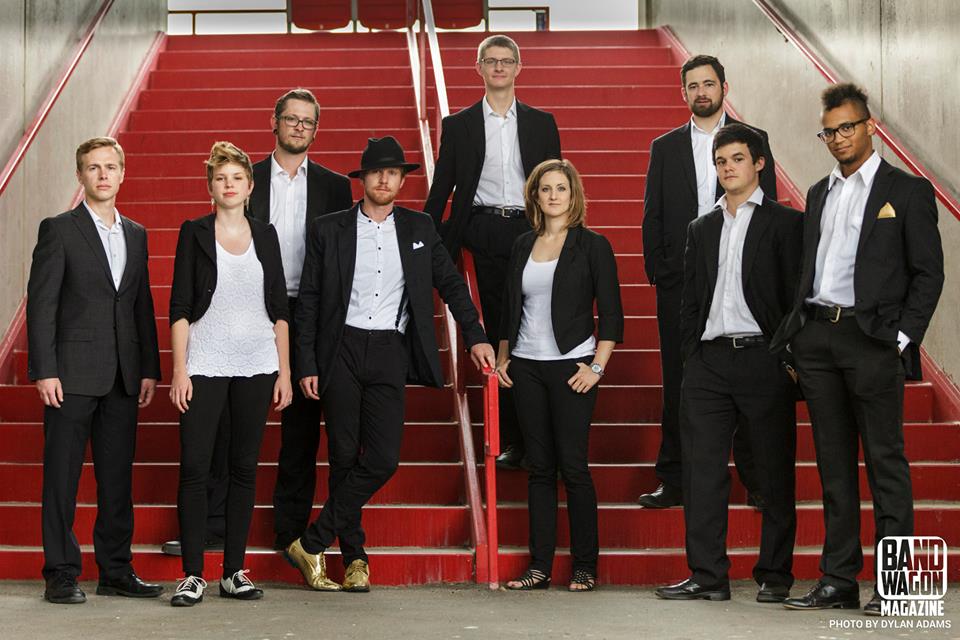 “Everything from the groove that you’re in, to the words that you say, to the melodies you sing is suppose to come from right here,” Johnny Burroughs, frontman of The Burroughs says using both open faced hands to clutch between his abdomen and lower rib cage. “If it’s not coming from here, than it’s not soul music.”

Without getting too metaphysical, if there is an existence of a soul, The Burroughs have mastered in transcribing what it sounds like to them. At the very least they’ve managed to uncover it’s very feeling in today’s day and age.

“We’ve been listening to soul music that came out 30 or 40 years ago but it’s still going on because there’s something there,” Hayden Farr who plays Baritone Saxophone for the band says. “I don’t know exactly what it is, but I feel it.”

Feeling–this idea surfaces a lot as the band describes their methodology and how they’ve managed to push their success since their spontaneous start two years ago. They’ve gained ground in the music scene and landed a gig playing direct support for the Steve Miller Band at Bohemian Nights this summer, a festival that they played last year when Pat Benatar headlined. At the remembrance of their time at NWF, among other thoughts Farr commented, “On the record, she’s still got it.”

This light-hearted playfulness isn’t anything unfamiliar in the band as they’re constantly reciting inside jokes. It’s refreshing to witness their ability to keep it light and yet work unbelievably hard to perfect everything about the band’s identity. They’ve established a comfortable bond as a nine piece ensemble, to the point that over half of them live under one roof and still enjoy making music together. There’s a carefree approach to their work that mimics the freedom of soul music.

“Because a majority of the group is already established in their life it’s not do or die, we get to enjoy it,” Johnny says. “I think there is a really healthy look at it in the band of let’s just ride this and enjoy it and enjoy the fact that we’re together and making music.”

As the story of the bands whimsical beginning is told, Craig Basarich, no longer a part of the band and Johnny conspired in their love of performance and soul to create a one-time-show.  In just two short years the band claimed BandWagon’s Battle of the Bands which launched their first EP, lined up dozens of headlining shows around the state, partnered with Spokesbuzz, and after months of mastering, their live album joins their discography.

With some minor changes to the lineup since their foundation the band consists of Johnny on vocals, Farr on baritone sax, Sean Hagemeister on guitar, Tom Amend on keys, Jeremy Fallis on trombone, Briana Harris on tenor sax, Alec Bell on trumpet, Mary Claxton on percussion and Brian Claxton on bass.

The last two years have been a blur the band says, one wave of opportunity after the next and as they coast through barriers that many local bands spend years overcoming, the timing in pop-culture couldn’t be more helpful.

“There’s just something raw and fun about soul,” Farr says. “Popular music is starting to get the horns back and I really like horns, especially in bands. It’s just fun.”

No doubt that the band is benefiting from top-of-the-charts popularizing horn music and energetic soul melodies, but this affection from pop culture doesn’t hinder their identity as Johnny sees the present as a time in music where anything can last.

Era-music may prevail, but the identity isn’t concrete. When artists like Bruno Mars and Justin Timberlake generalize the use of a horn section, they create a short-lived fad for the genre.  The boundless market muddles bands who know their roots and take on the responsibility to transcend old music respectfully into the present.

“The beginning of the band was based on we’re going to go and play old soul music. That’s at the heart of what we do,” Johnny says, “but I don’t think there’s any pressure, I think it’s just who we are.”

This grounded identity as a band is backed up by ideas like family, community, and fun, to create a contagious performance on stage. Hagemeister reiterates a philosophy instilled early in the band to be “if we’re dancing, they’re dancing,” which in the quirkiest and most sincere actions they uphold truly. They ignite a groove in their audience that overshadows any classification of old. It’s by far the most entertaining factor about the band as Johnny describes dancing to be a demonstration of the absolute pure joy of music. It’s this joy that founded their latest album.

“We thought, well if we’re going to make an album than we should highlight what it is we love, which is playing music and having the audience be a part of it,” Johnny says.

As the album came to fruition The Burroughs enlisted the incredible conglomerate of talent in their hometown to build their release of Sweaty Greeley Soul.

“What I think we have, that we haven’t had in other bands is people wanting to support us and help us and that’s huge,” Hagemeister says.

This support has flourished out of their hometown and as tribute they’ve branded most of the production of their live album, with Greeley. From the album art done by Betony Coons, to the recording and mixing done by Greeley native Colin Bricker at Mighty Fine Studios in Denver, the album is a bold symbol of who they are.

“We believe in this town and we’re excited to be a part of something from the ground work. We wanted to show off ‘this is where our music is made,’ it’s made here, it has this sound because it’s made here, with these people. We’ve tapped into the incredible pool of talent that’s around us and the hearts and souls that have backed us. That’s the whole reason the music exists. We had to include Greeley. Plus it makes everybody do a double take, every time,” Johnny says. “This is where we’re from. We’re putting it smack dab on the front of our first full length album because we’re not ashamed.”

Sweaty Greeley Soul release show, August 7, get the album on BandCamp and iTunes, July 28 in association with BandWagon Records.