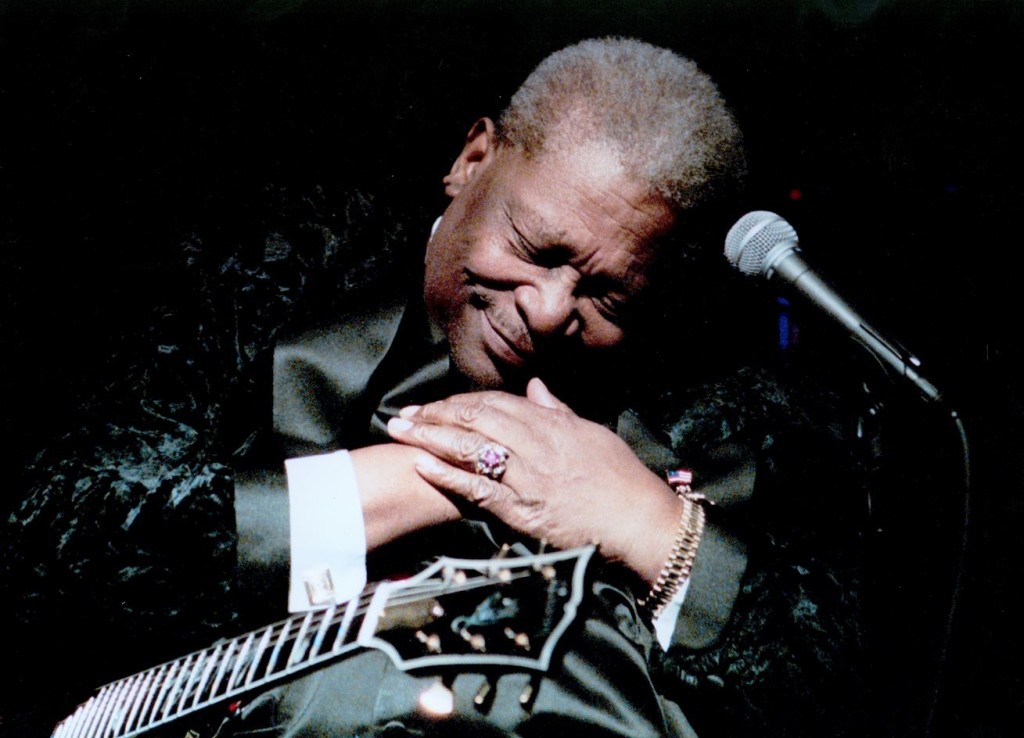 This morning, when I heard the news, a particular story came to my mind. There was once a Prince, who grew up in the richest castle within thousands of miles. He never wanted for anything, but after venturing down into his domain, he saw that many did. People were suffering. The Prince was appalled at what had been happening in his kingdom. Eschewing his royal upbringing, the Prince left, and roamed the surrounding lands. One day, he sat under a tree, and meditated. When he came to, he laughed. The Prince was Siddhartha Gautama. Buddha.

The principles of Buddhism aren’t that far removed from the principles of the blues. Man is doomed to suffering, but there’s no reason we can’t laugh about it. That’s what turns the blues into the Blues. One part is the suffering, the heart ache. The other, the more important part of the two, is laughing in the face of that sorrow. Of claiming dominion over your own mortality.

Last night, May 14th, Riley “BB” King passed away. Many of you have probably heard his name, though I’d wager not half as much know the web he has cast. He’s inspired generations of musicians, from Stevie Ray Vaughn, to Sheryl Crow, to John Mayer. He has been called the greatest bluesman of all time, and I can’t say that’s too far off the mark. Armed with his Gibson ES-355 Lucile, King secured his spot among the most adored bluesmen with seminal tunes like “Nobody Loves Me But My Mother,” “Paying the Cost to Be the Boss,” and of course “The Thrill is Gone.”

As a boy growing up in Mississippi, King earned dimes playing on the street corner. In 1947, when this became insufficient, he hitchhiked to Memphis, which at the time was the blues capital of the world. Once arrived, King found lodging with a cousin Bukka White, one of the premier bluesmen of his time. Going by “Beale Street Blues Boy,” King shortened the nickname to “BB” for the sake of his slowly growing radio fan base. King had been playing small sets on Sonny Boy Williamson’s radio show, and was starting to gain traction. It was with “Three O’Clock Blues” that King lit the fires of his soon to be burning popularity.

While in playing a show in Arkansas some time later, his set was interrupted by a brawl. The scuffle knocked over a cairoscene lamp, setting the building alight. After making it outside to safety, King realized he had left his guitar inside, a guitar he had payed $30 for, no small sum back in the day. Risking his own health and wellbeing, King charged back into the inferno to save his new 6-string. Only after the flames had turned to cinder did he find the fight had been started over a woman named Lucille. Since that moment, whatever shape or brand the guitar took, it was Lucille.

The antithesis of a child running from their problems, King reveled in the utter ubiquitousness of pain, the humanness of strife. He was once quoted saying “The blues was bleeding the same blood as me.” The blues is in all of us, and BB knew this. Things are only as insurmountable as you allow them to be. The most important notion of the blues is that no one is alone in feeling them. Whether it’s a broken home, or spilled milk. Where King succeeded so heavenly, is laughing where others might cry. Thank you, Mr. King. You’ve filled the corners of my home since before I was born. You taught us to cry, and showed us how to laugh. The thrill is most certainly gone.