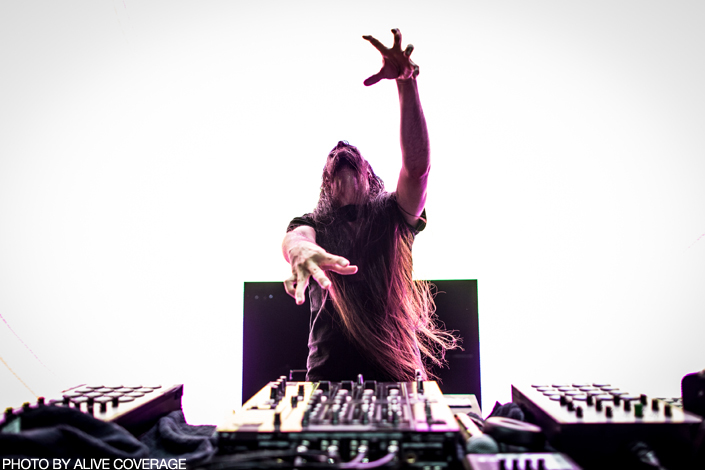 “I’ve seen a lot of personal friends lives be damaged, destroyed or ended through making the wrong decisions with drug use,” Lorin Ashton says. “I’ve also seen some amazing transformations happen from very limited and responsible experimentation. I want to be ultra careful about not condoning anything without expressing how important it is to be safe and aware.”

Ashton, better known by his stage moniker Bassnectar, is often at the helm of massive EDM parties and has undoubtedly seen all sorts of debauchery in the crowd. However, at age 36, he’s learned valuable lessons over the years— not only as a musician, but also simply as a human being.

Based in the Bay Area, the electronic mastermind behind 2007’s Underground Communication and this year’s Noise Vs. Beauty, he’s in a place in his career where he can finally coast on his laurels. In anticipation of his upcoming Denver show on December 30, we talked to Ashton about everything from prevalent drug use in the festival circuits to death metal.

You cite metal as being a huge influence on you. How did you end up making electronic music?

I definitely feel like each step in my musical evolution moved from one step to the next with a very related, but cryptic path. I appear to have interests that are very diverse, but to me, are very connected. The death metal scene especially the underground scene when I was in high school was so remote that you were lucky to find one person that lived close to you that liked music as satanic as filthy as horrible and disgusting as you liked it. It was really tough to feel a community. There’s nothing like the rush of enjoying your favorite song with thousands of other people in one room and that was something you couldn’t have in death metal. That was before the Internet so that meant we needed to gather in unique ways. One way we did it was by a really aggressive grassroots campaign of co-promoting each other’s music. I was really used to playing really small DIY type death metal shows and also promoting all of my friend’s music as well. When I found the rave scene it was a similar underground type of sound, but this time it was extremely friendly and open hearted and I felt a lot more resonance with that than I did with the death metal scene, which made it an easy transition. 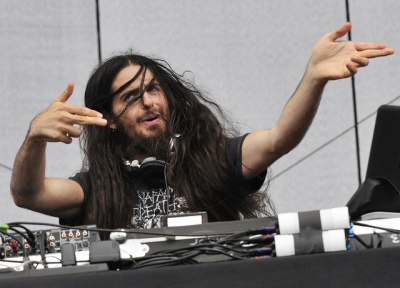 What drew you to death metal?

I’ve always been a goof and a little bit of a pansy [laughs]. I liked death metal because it was so raw and intense and I also appreciated, when I was a 15 year old boy, I appreciated the shock value. I wanted to push back on authority systems that were trying to make me believe in one thing or act a certain way and I needed help on asserting who I was and pushing back on Christianity and things that I thought were illogical. Death metal was an amazing technique to do that.

It’s interesting how the current electronic explosion doesn’t have that same formula to follow when it comes to style. I really like that. I like that there is more of a cross-cultural thing. It’s a more open scene with more types of people. It is open to the nerds. Calling all nerds. HAHA

Let’s talk about the hair. When was the last time you got it cut?

[Laughs] I was 19. It’s been at least 15 years. It’s not like a hairstyle. It’s more like an anti-style. It’s been long when long hair was very popular and it’s been long when long hair was very unpopular. It’s there because I just don’t want to cut my hair. If I ever do, I will. I used to wear it up to keep it out of my face when I’d DJ, but I compulsively twitch and bounce around and freak out and it would always fall out. I would always spend half my set having to tie my hair up. Now I just let it hang down and it’s nice because it’s like a little curtain that I can see through, but other people can’t. If you try to swing your hair in front of your face you can see through it. You gotta try it.

You said in an interview that you’ve been sober since 1995. Is that still the case and if so, what are your thoughts on your shows providing an ideal platform for drug use, something highly prevalent in the festival scene?

It’s a loaded topic. There are opposing views. I think it’s really important that people have freedom to explore, express and be who they want to be. On the other hand, I think it’s really important that people value their health and nervous systems and the magic and mystery of our bodies, which we can never comprehend because it’s so far beyond our grasp. So experimenting with drugs, whether it’s pharmaceuticals, whether it’s something legal like alcohol or whether it’s an illegal recreational drug, can be really dangerous. I’ve seen a lot of personal friends lives be damaged, destroyed or ended through making the wrong decisions with drug use. I’ve also seen some amazing transformations happen from very limited and responsible experimentation. I want to be ultra careful about not condoning anything without expressing how important it is to be safe and aware. That same safety and awareness should be practiced when taking antibiotics, Ambien or Adderall. Any parent that is worried their kids are taking drugs and are letting their kids take Adderall is completely missing the point. It’s important to treat your nervous systems as absolute treasures. That goes for recreational drugs, coffee and diets, so of course, I’m horrified by how much drugs use goes on, not even at dubstep shows, but at concerts in general.

You’ve been touring nonstop for years now. Is it difficult to recreate that same magic in a studio setting?

I don’t really try to. They are different worlds. The live setting is all about how many live human beings are in the room. It’s basically me putting together a soundtrack for people to enjoy themselves to. The whole entire premise of the experience is what is the atmosphere like and how does each human being feel?  And again, I’m playing with their nervous systems.

How do you feel about the music you make?

The music that I make is a very personal reflection. It isn’t always intended to satisfy your every need. It may be intended for something entirely different. I think some people get confused and think I’m trying to please them with every song I make and I’m not. When someone asks me to go back to my old style or return to my roots, that’s usually a sign that they have no idea what my real style is or what my roots are. I am fascinated by so many different styles and sound combinations that everything I make is just a natural result of combining those influences. And if something you hear doesn’t sound like Bassnectar to you then you just don’t know what Bassnectar sounds like yet. Enjoy it or don’t, but I hope you do.