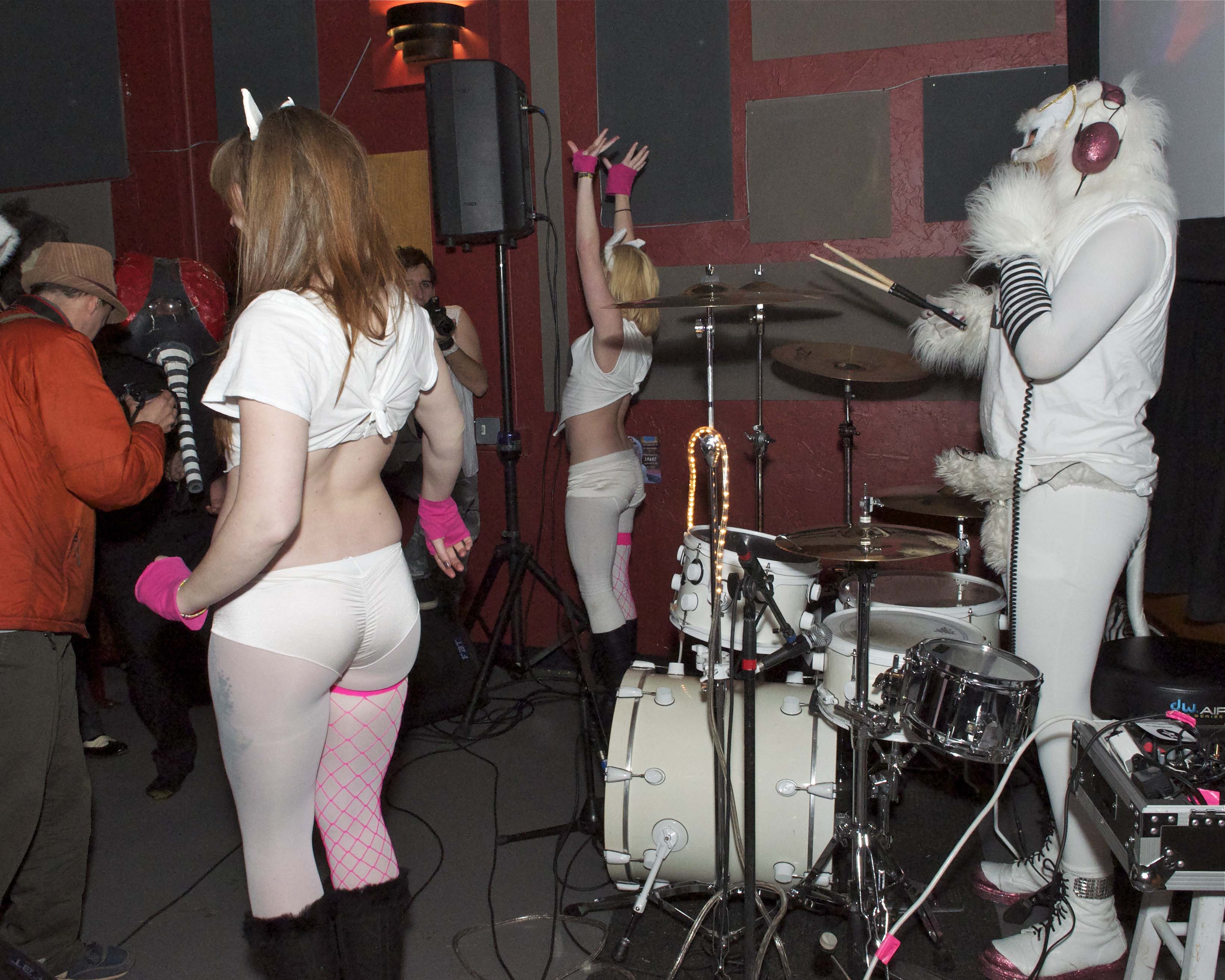 What a crazy party. All of a sudden we, the audience, were surrounded by furries who were all dancing madly to the leader of the animal gang, David Jacoby, donned in a fuzzy cat outfit of his own and playing the drums, singing insanity into the microphone. I once again pushed my way to the front where I joined the dancing panda, mosquito, wolf, gorilla, and underage-ecstasy-kid in spasmodic “dancing.” I even got to try on some of the animal heads. Nobody in that room left unentertained. I’m still sore.

What are your thoughts on how your show went?

That show was one of the best shows I’ve played in a long time. I played the Lyric Cinema for my CD release party and so I knew the sound was going to be awesome. The sound guy was super cool. And everything sounded wonderful and everyone seemed like they were having a really good time. A lot of people came up to me and were fucking blown away because they didn’t know what to expect. I was really pleased about that.

Yeah, that was one of the craziest shows I think I’ve ever been to.

That’s awesome! The whole weekend was fun too. I had Russian Girl Kitty up with me for the weekend too, so that added a bonus. We went and saw some shows, but she wasn’t 21, so we couldn’t get into all the venues. But we saw Dead Floyd at The Aggie and Square Peg was unbelievable at Bizarre Bazaar. They are a jazz group, they are just unbelievable. We saw some cool stuff and hung out and people were tripping out on our costumes. We had sushi at Three Heroes. Cat’s gotta have sushi, right?!

Your project, you’re going to have to explain to me the inspiration for that. It’s such an interesting concept.

I’m coming from a couple veins here. There’s a lot of European influence here. The first influence is the Krautrock Movement in Germany, or Kosmische musik as they like to call it. Big bands that influence me are: Neu! and Kraftwerk. Kraftwerk is really huge on my list.

And then of course Brian Eno is also huge on my list. Then you have the visual part of it, which is a blend of Ziggy Stardust, some of the stuff Eno was doing with Roxy Music, the whole androgynous character. And then also Peter Gabriel, in the early Genesis stage, 1972-73, was a really strange androgynous character, kind of a mysterious traveler type.

I’m tying in all the audio and visual stuff together into a kind of DJ Shadow, DJ Mark Farina, with some glitch and downtempo. If that all makes any sense.

Why do you choose to play drums live, as opposed to any other instrument that you’ve recorded for your sound?

I’ve been a drummer for a long time now. It’s been, what? 23 years? When I started WhiteCatPink, I started off as the drummer and the vocalist and I actually had a full band with me. And I started getting really frustrated because a lot of musicians like to get stoned and drunk and I’m a straight edge. I don’t do drugs, I don’t drink, I don’t eat meat. I’m really hardcore about that. I play it straight all the time. And so I was getting really frustrated, because I have a specific sound in mind, a specific vision.

I think I just did it out of necessity too, because I was sick and tired of depending on other people. When you want something done right, you gotta do it yourself. I’m a multi-instrumentalist, so I was like, if there was a way I could split myself up into four of me, that’s how I do it. I started off as a drummer, and I still am, but now I have full control over the full project and the full vision and it’s really nice.