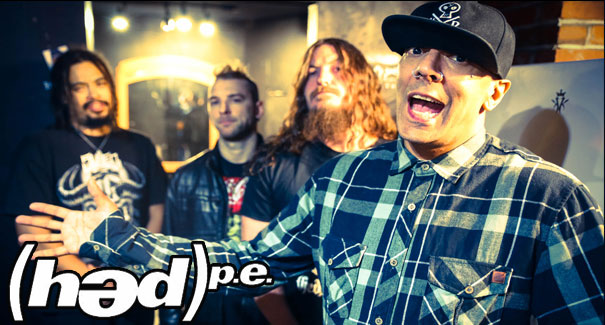 (hƏd) p.e. is a highly energetic, socio-political, in your face band that brings a sense of familiarity to their listeners. (hƏd) p.e. has shared lineups with bands like Black Sabbath, deftones, System of a Down, Skindred, Primus, Snot, Powerman 5000, Kottonmouth Kings and Tech N9ne just to name a few. Studio albums have been recorded from 1994 to 2016 scattered over four different record labels. The spirit of the band has evolved over the years, but the above-mentioned description stands the test of time. The one common denominator throughout the years has been their frontman Jahred. We caught up with (hƏd) p.e. to gain some more insight.

Q: (hƏ d) p.e. has always transcended many genres such as hip hop, reggae, gangster rap, punk, rock and heavy metal, which always keeps the listener guessing. Is there a method to this madness?

A: I’d like to think there is. Sometimes it’s a blessing and a curse to just go where your musical compass is taking you without worrying too much about trying to keep things within the same genre, which is what’s normally done. There is a method to the madness regardless, though.

Q: What has been the mission of (hƏd) p.e. past, present, and future?

A: Part of the mission for me is to sustain myself as an artist. In other words, to continue making a living doing music. In the beginning, the mission, I think, was just to jam, and the mission now is, I’m a devoted father and husband, which is much different from when I started twenty years ago when the mission was to get fucked up and get pussy and more pussy or whatever. Within the music is where I am passing on te messages that I’m getting and then there’s times where it’s more personal and passing what I feel I’m going through to see if other people are having the same experiences. The next phases of the mission are the anti-fascist, because I’m feeling really anti-fascist at the moment. It’s definitely going to continue to be a statement about commitment to family and things like that, but there may be an anti-fascist thing coming up.

Q: Describe the process of writing a song. Where do you start? Do you start with lyrics, incorporate music stylization? Pick a specific song, if you will.

A: A lot of times it’s just looking for music that I like and then when I find the music that I like I sit there for a few days in a row listening to the same track for hours trying to feel what kind of words or message the music is fit to carry and from there start writing the words to the music. There are times when I would come up with a lyrical idea and put the music to that, but most of the time I am looking for music to stimulate the lyrical thought process. I’ll have ideas of songs that I want to write about or certain subject matter, but it’ll come out according to whatever track is moving me at the moment.

Q: What is the next step for (hƏd) p.e.? What’s your touring schedule look like and when can we expect some new material?

A: We’re leaving for two months to go overseas in January, so we will be all over the place for that. We’re trying to get back to Australia next year and also trying to finish an album. It’s really busy, but it’s great. At the level I’m at, it takes a lot of shows to put together to finance my life. I’m on the road more than I’d like to be, but at lease there are still clubs that want us there.